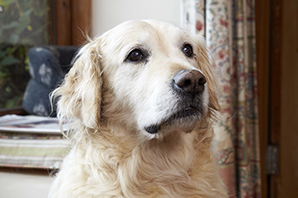 It’s a topic that’s long been debated and discussed; are dogs colour blind?

This idea has been widely accepted for decades, but is everything in a dog’s world really black and white?

Petplan looks at the debates and arguments around dog colour blindness, whether our canine companions see the same as humans, and most importantly, the truth of the matter.

The Debate of what dogs can and can’t see

There has been much speculation over the years as to what dogs can and can’t see clearly.

Here are just a few of the most common theories:

Dogs only see in black and white - Dog vision being limited to black and white is a common theory that was often thrown around the school playground and is now widely considered to be somewhat an old wives’ tale! Vets used to believe that this was the case, although over time science seems to have ruled this philosophy out of the mix.

Dogs have a narrower range of colour - The most common belief of today is that dogs have a smaller range of colour than people do. People liken this to some human equivalents of colour-blindness where colour can be seen but the spectrum is limited or less vivid.

But which theory is true? We’ll reveal the answer below…

How dogs’ eyes differ to humans

So what is the science behind the differences in people and canine vision?

The truth behind your dog’s vision

Dogs do have colour vision!

However, our furry friends’ colour spectrum is limited due to having more rods and fewer cones in the retina.

Predominantly the colours a dog can view are blues, yellows and greys while other colours tend to blend into one of these.

Therefore the belief that dogs are completely colour blind is incorrect. Instead, their colour vision is similar to a person with red-green colour blindness.

When training your four-legged companion try wearing colours that they can see clearly, or that differ drastically from your surroundings. It’s also advised to have your dog’s eyes checked at least annually to stay on top of optical healthcare!

Does your dog respond different to certain colours? Let us know in the comments section below…