Can't eat, won't eat? Why your pet may be off its food 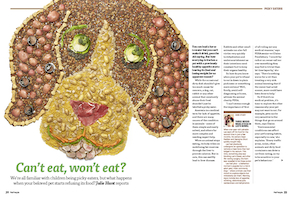 Julie Hunt reports on what steps to take when your beloved pet starts refusing its food. From the Petpeople magazine archive

You can lead a horse to water but you can't make it drink, goes the old saying. But how worrying is it when a pet with a previously healthy appetite starts leaving its food and losing weight for no apparent reason?

While the occasional dirty dish shouldn't give too much cause for concern, a dog, cat, rabbit or any other animal that constantly shuns their food shouldn't just be labelled a picky eater.

Anorexia is a medical term for lack of appetite, and there are many causes of the condition in animals - some of them simple and easily solved, and others far more complex and needing expert help.

When an animal stops eating, its body relies on mobilising fat reserves through the liver to provide calories. But in cats, this can swiftly lead to liver disease. Rabbits and other small animals can also fall victim very quickly to dehydration and undernourishment as their intestines need constant fuel to keep their organs healthy.

So how do you know when your pet's refusal to eat is down to plain pickiness or something more serious? Well, firstly, avoid self-diagnosing at home, advises the animal charity PDSA.

'I can't stress enough the importance of first of all ruling out any medical reasons,' says PDSA senior vet Elaine Pendlebury. 'I would far rather an owner call me over something they may feel is trivial than let time lapse by,' she says. 'There's nothing worse for a vet than treating a very sick animal knowing that if the owner had acted sooner, more could have been done to help.'

So if there's no medical problem, it's time to explore the other reasons why your pet may not want to eat. For example, pets can be very sensitive to the things that go on around them, says Elaine.

'Environmental conditions can affect your pet's eating habits, especially in cats,' she explains. 'Heavy traffic areas, noise, other animals and dirty food containers can deter a cat from eating, so try to be sensitive to your pet's behaviour.'

A vet for more than 40 years, Harvey Locke says that sometimes a loss of appetite is the only signal of an underlying medical condition. 'A dog with arthritis is easy to detect, but animals can look OK yet be very sick. Bitches who have been spayed will go through false pregnancies where their hormone levels can become abnormal. This kind of thing is easily treated, but it could be something far more serious such as slow-progressing kidney degeneration. We are also seeing an increase in sugar diabetes among dogs and cats because of a growing problem of obesity in animals.'

Once a medical problem has been ruled out, Harvey suggests that owners take a long look at the way they feed their pets.

'Some owners may worry if their animal doesn't eat two or three meals a day, like they do,' he says. 'This has come about with the domestication of animals. In the wild, a dog would eat only when it had made a kill, which would be every two to three days. Dogs are cunning animals too, and they will become fussy if they know that if they hold off long enough, they will get a bit of fillet steak. Believe me, no dog will starve itself, and will eat its own food when it's hungry.'

The situation is slightly different in cats and rabbits, says Harvey, who is also president of the British Veterinary Association. 'If a cat goes too long without food, it can suffer liver failure. Rabbits can suffer gut stasis, where the intestines stop moving and become blocked. Rabbits are also natural grazers, and if they stop eating, they can develop severe dental problems.' He advises owners to get into good feeding habits and consult their vet for any nutritional advice.

Other ailments such as worms, dental problems, infections and blockages in the throat or intestinal tract can all be ruled out by your vet, first with a simple physical examination and then, if necessary, an X-ray or ultrasound scan. And animals respond well to antibiotics and other treatment if an illness is caught in time.

Stress is another factor. Moving house or the arrival of a new baby or another animal can all interfere. In particular, dogs can experience a loss in appetite when grieving. 'Dogs get very attached to people and other animals, and when they have lost a companion, it can affect their behaviour and mood, which has a knock-on effect on their eating,' says Elaine.

On a less emotional level, pets quickly get a taste for human food, which can make their own dish seem far less appealing. 'I treated a dog whose owner fed it titbits of pizza until that's all it wanted to eat, but owners doing this are making a rod for their own back,'says Elaine.

'A dog or a cat may wait patiently for anything to 'fall' from the dining room table, but once they realise they are not going to get anything, they wander back to their food dishes.'

Changes in the weather can also cause a decrease in appetite, and it is common for pets to be less active in the summer months.

A sudden change to a pet's diet can be another problem, while certain foods can cause irritation. Fatty or greasy foods may cause gas and cramping and lead to a loss in appetite. Some animals can even be allergic to some proteins in pet foods such as chicken, beef, wheat, corn or soy.

Even if your pet's loss of appetite is not caused by a medical problem, a sustained period of not eating may lead to serious medical trouble.

Elaine advises a common-sense approach by owners. 'Animals pick up on a lot of fuss and it usually makes them even more reluctant to eat,' she says. 'Try to keep a cool head. First, seek a vet's opinion, then try to glean an understanding, through trial and error, of your pet's likes and dislikes when it comes to feeding.'

When one-year-old Labrador Leo went off his food for the second time in just a few months, his owners Dean Redden and Georgina Short quickly sought help.

Leo had previously undergone an operation to remove a meat bone that had lodged in his rectum. This time, something else was blocking Leo's bowel, and after life-saving surgery, the item was revealed to be three socks!

Leo had pica - a behaviour normal in puppies but a risk in adult pets, most commonly dogs - where animals use their mouth to explore objects but mistakenly eat them. Warning signs include loss of appetite, vomiting, abdominal pain, restlessness and dehydration.

My rabbits are anorexic

For the past three years, Janet Warnes' bunnies Prince, a seven-year-old Dutch, and Tia, a four-year-old cross, have suffered with a recurring anorexia problem that causes them to suddenly stop eating and become underweight, withdrawn and lethargic.

Although anorexia is common in rabbits and is usually caused by stress, Janet's vet can't say why her rabbits repeatedly fall victim to the condition - usually every three months. 'I put it down to the stress of living on a busy main road,' says Janet.

My kitten was infested with worms

Samantha Plant expected the usual teething problems when she brought home Sammy and Rolo, two eight-week-old kittens. But she couldn't have imagined that one would be fighting for its life a week later.

Rolo was off his food, and alarm bells started ringing when Sam found him collapsed in his litter tray. He had a severe worm infestation, which had left him with internal bleeding.

'The vet told us the chances of Rolo surviving were very slim,' says Sam. 'He looked so limp and lifeless that I really thought there was no way back for him.'

Rolo was dewormed, given strong medication and put on a high-calorie diet. Against all the odds, he began to recover.

PDSA senior vet Tim Browning says: 'There are 2.5 million unwormed cats in the UK. Worming and other preventive care is essential to keep pets fit and healthy.'