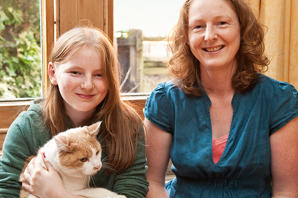 The Parmee family were devastated when their beloved cat Chewie was diagnosed with lymphoma. But thanks to his vet and lots of love, he's now well again.

Mum-of-three Elizabeth Parmee welcomed Chewie into her family six years ago, and he has been a cherished member ever since. A firm favourite with children Willow, Jacob and Roan, they named him after Star Wars character Chewbacca.

But when Chewie was three, tumours were discovered on his kidneys and he was diagnosed with lymphoma. 'The decision to treat the lymphoma was very difficult,' explains Elizabeth. 'At times pet owners have to make choices without really knowing what the animal would want. But we knew we'd like him to be around forever as he is so lovely. Petplan were very supportive during this difficult time. I made just one call to explain that Chewie was ill and the staff were immediately friendly and helpful. Both our vet and the referral centre were happy for Petplan to pay them directly, taking away some of the stress and enabling us to focus on his treatment.'

After his initial diagnosis, Chewie was away from home for two weeks in December. 'We all missed him terribly while he was gone. We had already bought his presents, and it was sad that he wasn't around to share Christmas with us.'

Fortunately, Chewie responded well to the six-month chemotherapy programme. He lost his whiskers and some fur - Elizabeth says he looked 'a bit woolly' for a while - but he made a full recovery, much to the delight of Willow, Jacob and Roan.

Elizabeth says: 'Chewie has regular follow-up checks and is once again a happy boy enjoying normal cat capers! We know we made the right decision. Without Petplan he would not be alive. The service Petplan offered was a lifesaver for Chewie - and we love him even more now.'

Written by Melanie Coleman and taken from the Autumn 2013 issue of PetPeople.

Do you have a story to share with us? Let us know in the box below.