Debate: are boy and girl pets really that different? 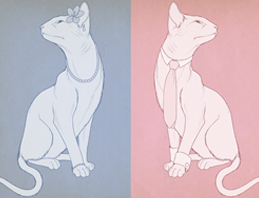 Here's what Amanda Riley-Jones found in her recent report on gender stereotypes for PetPeople magazine. Let us know what you think by commenting below!

Q: Are boys really that boisterous? And are girls more affectionate?
Many parents argue that boys are more energetic than their female peers. But what about animals?

Dog trainer and psychologist June McNicholas says that the dogs and bitches she trains have the same energy levels, but cat behaviourist Celia Haddon says: 'I don't know of any scientific research to back this up, but I have a gut feeling that neutered males are more playful than neutered females. But maybe that is some sort of feline sexism in me! Perhaps I treat male cats differently, and that makes them more playful?'

In terms of friendliness and general character, many experts say that once pets are neutered, there is little difference between the genders. Instead, genes and early socialisation play a far more important role.

'In order to be really domesticated, a cat needs to have been handled by humans within the first eight weeks of its life,' says Celia. Rabbits also benefit from early handling, says Anne Mitchell of the Rabbit Welfare Association: 'If a rabbit is handled from when it leaves the nest, it is more likely to be confident and have a nice temperament.'

For dogs especially, a third big influence is breed. For instance, Dr Stanley Coren, professor of psychology at the University of British Columbia in Canada, has found from his research that Basset Hounds and Bulldogs are generally placid, whereas Dalmatians and most terriers tend to be more excitable. Fascinatingly, his research has found that, whether females are from reactive or calm breeds, they have more extreme personalities than their male counterparts.

Q: Who's best with kids? Perhaps female dogs are more appropriate?
If you're going to mix pets and kids, it's essential that they get along. But will one gender fit into a family situation better than another? For example, some owners believe that female dogs have a maternal instinct when it comes to children.

'My female dogs have bonded with everyone in the family,' says June McNicholas, 'and have been more amenable to children.'

However, Dr Stanley Coren says: 'This belief is simply an extension of our societal stereotype that female humans are more motherly and emotionally responsive.'

Again, it seems, socialisation is key. 'Dogs of either sex that have had little or no contact with children may become fearful, defensively growl or snap, or become over-excited and try to grab what it sees as large, moving toys,' says Marie Miller from the Association of Pet Dog Trainers.

There's no doubt about it: testosterone matters. It can make a big difference, driving male dogs and tomcats to spray, stray and fight. Even in rabbits, seen by some as timid, the hormone can be seen in belligerent behaviour between males.

However, unneutered females have their moments too. Cats can protect their territory with gusto and, in rabbits, sexually mature does can suddenly start growling and biting.

Dog trainer and behaviourist Carolyn Menteith says: 'Female dogs' behaviour can be more changeable because of their hormone cycles. When bitches living together get aggressive with each other, it can be the nastiest aggression that we behaviourists have to deal with.

'You can't generalise, but in my opinion, when neutered, the differences between the sexes blur considerably and the individual temperament, personality and breed of dog probably becomes more important than their sex.'

Q: Who's easier to train? Are boys more wayward than girls?
Whether girls or boys are more biddable is hotly debated.

'Some people see females as easier to train - partly because male dogs are often more distracted by smells and looking for girls!' says June McNicholas. 'In my personal experience, I have always found males easier to train because they are more bonded with me.'

Marie Miller adds: 'Whether they are dogs or bitches, puppies need to be well socialised and trained so that they become well-balanced adult dogs.'

Even in later life, training can transform the behaviour of an older dog and change their character for the better. Graham Thompson, deputy chair of the Association of Pet Behaviour Counsellors, shares his home with three female rescue dogs. When Jess, a one-and-a-half-year-old Border Collie, came into his life, she didn't generally trust people or other dogs.

'She was very aggressive over resources - partly due to her genetic influence, partly her learned experience that aggression works. Over time, I have taught that if she's patient and waits for food, toys or attention, she will get what she wants in the end. She now gets along with my other dogs, and is much more gentle.

'Jess shows that it's not about the gender, or even the breed of dog. Training and rehabilitating her has been hard work, but she's seven now and a different dog.'

What do you think about pet gender? Is it all stereotypes, or is there something in the perceived differences? Let us know by commenting below