Is it fine to share your bed with your pet? Debate update 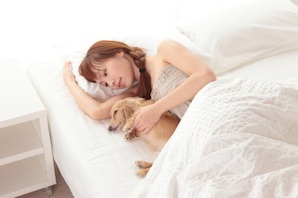 Does snuggling up with your pet help you both to get a good night's sleep, or is letting your companion into bed strictly off limits? From pusses on pillows to dogs under duvets, we'd love to hear your thoughts on the subject.

Many thanks to the hundreds of you who have commented so far. If you’re still undecided on the issue, perhaps the thoughts of our experts will help you make up your mind…

‘We belong to society and era in which people are quite likely to live on their own – and for many people, their pet is their only companion. It’s a very mammalian instinct to feel vulnerable when you’re asleep, so sharing your bed can be comforting and reassuring for both the pet and its owner.

‘Obviously, it depends on the size of your pet and there are important hygiene issues to consider. If the pet has fleas, then you certainly don’t want them in your bed. And if your pet is prone to behavioural problems – separation anxiety, for example – then close contact at night could make those problems worse.

‘But we’re learning more about the neurochemistry of physical contact. There’s lots of research that looks at how humans release a hormone called oxytocin when they feel relaxed and, in particular, when they feel affection towards another living being. The same research has been carried out among pets, and its findings show that there’s no doubt dogs and cats also release oxytocin when they feel close to a human being. So the concept of bonding with an animal is more neurochemical than we realised a decade ago.

‘Sharing your bed with your pet is about personal choice. I disagree with the ‘dog-pack theory’ – we do not need to constantly show our dogs who is boss. But it is important to establish some initial ground rules and stick to them. And whatever your decision, you musn’t feel guilty about it.’

‘I wouldn’t recommend that pet owners allow dogs or cats to sleep in or on their beds. There are health risks associated with being close to an animal for long periods – not least the potential for parasitic infestations to be passed from the pet to its owner.

‘Dogs and cats pick up fleas and ticks – and once fleas are established in your home, it’s hard to get rid of them. A flea can lay 500–600 eggs that turn into larvae, then pupae, and can exist in furniture, bedding and carpet for months. Plus, a disease called toxoplasmosis can be passed from cats to people and this  poses a particular risk to pregnant women.

‘An increasing number of people in the UK are suffering from allergies and asthma, and pets are an obvious trigger for these conditions. We’re seeing more allergies in pets, too. Dogs, in particular, can develop allergies to certain substances found in the home, such as the filling in duvets. If a pet is prone to an allergy, sleeping in its owner’s bed can trigger symptoms such as skin irritation or chronic diarrhoea.

‘There are behavioural issues that need to be considered, too. Dogs can be very possessive about their territory and will become aggressive if you try to take it away from them – and that can prove to be very tricky when it’s your own bed!

‘Animals tend not to sleep soundly for long periods of time, either, so you can end up suffering from disturbed sleep patterns if you rest alongside them. Remember, on average, people only spend seven to eight hours in bed. There are another 16 or 17 hours in the day in which you can bond with your pet in a more active and positive way.’

Let us know your answer to the question ‘Is it fine to share your bed with your pet?’ by commenting in the box below.