Everything you ever wanted to know about Siamese cats 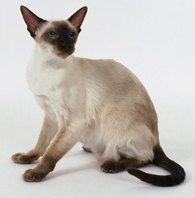 Known to 'talk' to their owners, the distinctive Siamese is one of the most popular and well-known feline breeds in the world. From the PetPeople magazine features archive.

Originally from Siam, which we now know as Thailand, this breed is said to have descended from sacred temple cats owned by the royal family. Called Wichien-maat in Thai, meaning 'Moon Diamond', because of their trademark almond-shaped, bright-blue eyes, the breed was first seen outside Thailand in the UK. They were exported from Siam in 1884 by the then British consul-general in Bangkok Edward Blencowe Gould. He presented his cat-loving sister, Lilian Jane Veley, with a breeding pair of Siamese, which proved such a hit that she went on to co-found the Siamese Cat Club in 1901.

The cat made an immediate impression in Britain with its unique appearance and dog-like behaviour. With intensive selective breeding and a large group of ardent admirers, the Siamese has evolved in physique and grown in popularity over the past 100 years to become one of the most common cat breeds in Europe and North America.

Are they for you?
Siamese are intensely loyal and loving to a fault. While they tolerate dogs and children, they are best suited to a solitary life or kept as a pair from birth. Known for their loud vocal personalities, you will never lose a Siamese in your house! They are entertaining, lively and some would say noisy cats, who will rule the roost when you are out and greet you enthusiastically on your return home. Outgoing and extroverted, they crave attention. They are also highly intelligent and amusing, so need lots of stimulation and attention from their owners, and will happily learn tricks such as fetching toys. Given regular health checks by a vet and good dental treatment throughout life, they are generally a very healthy breed.

Grooming
Siamese have short fur, shed little and take pride in their appearance, so they need very little help to groom themselves. Although they'll enjoy the attention brushing provides, offering your cats a good-quality diet is the most important way to keep their coats looking shiny and healthy. If you have indoor cats, the odd pedicure may save your furniture from scratches!

Body Shape
Medium-sized cats with long, muscular bodies, Siamese are prized for their athletic appearance and graceful movement. Their body shape has changed somewhat since leaving their Thai homeland - they are now much leaner, with long, slender legs and small, oval-shaped paws. And, unlike their forefathers, they have a long and tapering tail, free from kinks. With a triangular-shaped head and pointed nose, their best feature has to be their blue eyes, almond in shape and brimming with attitude.

Diet
As active cats, Siamese require a good-quality and well-balanced diet to stay energised, fit and healthy. Eating either dry or wet diets, they can prove a little fussy and rarely tend to overeat. However, monitoring their weight is important in order to retain their fine-boned, elegant appearance.

Health
Cross-eyed Siamese are now rare, thanks to selective breeding, but some liver and kidney problems do exist in the breed. Known for their longevity, you can expect a Siamese to live for at least 15 years, with cases of the breed surviving more than two decades not uncommon.

Coat
Born either pure cream or brilliant white, Siamese begin to show their true colours at around four weeks of age. They inherit a gene that causes partial albinism, where the production of melanin (the body's natural skin pigment) fails to work at normal body temperatures. This means that cooler areas of the body, such as the feet, ears and tail, become a darker colour, resulting in the breed's famous 'pointed' coat pattern. Seal, blue, chocolate and lilac 'points' are the four colours registered throughout the world, though there are others recognised in the UK that have been created as a result of outbreeding. Siamese tend to darken with age and adult cats living in warmer climates are more likely to be lighter in colour than those in cooler places.

By Scott Miller, vet and writer

Originally published in issue 2 of PetPeople, the Petplan customer magazine

December 23, 2010 Share via Email Share via Email Share on LinkedIn Share via whatsapp Share on Twitter Share on Facebook Share this article:
Back to top
brenda walukonis
yes my siamese clover (pleasetobe pretty petal) was so atatched to her half sister delilah (pleasetobe pole dancer) that when she died suddenly at 2years she went into a decline. she did not eat and lost so much weight that she ended up in hospital for nearly a week. I bought a new companion for her straight away when she came out of the hospital angel (pleasetobe pure and simple). they get on very well but clover and delilah had such a bond im sure clover still misses her.i was at the hospital the other week and my carer was at home. at one point she sat on my chair and clover who doesn't like her and usualy stays out of the way came rushing over to her and started telling her off for being in mummy's chair. apparently she was so vocal and staring that she got up from the chair and moved. after she moved clover moved away and was quiet again. she is a mummies girl.
Posted on: February 23 2011