A life-changing friendship story of a boy and his dog 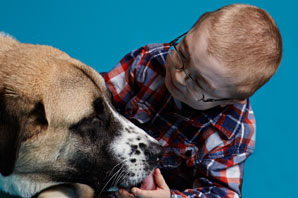 When rescue dog Haatchi came into Owen Howkins' life, nobody could have predicted the remarkable boost it would bring the pair, discovers Kath Stathers for Petplan.

Facebook can claim a hand in many relationships, but who would have thought it would bring together an exuberant, three-legged Anatolian Shepherd puppy and a little boy from Basingstoke?

'We'd been talking about getting another dog,' says the boy's father, Will Howkins, 'and we'd looked at a few rescue dogs, but none had been right. Then my fiancée Colleen saw a picture of Haatchi on Facebook.'

Haatchi was with a foster carer after a shocking start in life. He'd been tied to a railway line but had miraculously survived the impact of the train. He was found by the RSPCA with a severely injured back leg and tail, both of which had to be amputated. 'As soon as Colleen met him, she knew he was the dog for us,' says Will.

But it's Will's son Owen, seven, who has the strongest bond with Haatchi. Owen suffers from a rare medical condition called Schwartz-Jampel syndrome that causes his muscles to be permanently tense. 'Haatchi arrived late at night and when Owen got up the next morning, he went straight to Haatchi on his walker and snuggled up next to him,' Will says.

And that's the way it's been ever since. 'They have a strong bond,' continues Will. 'If they're both in the house, they'll be together.'

This bond has also helped to give Owen a new-found confidence. 'Before we got Haatchi, Owen was becoming conscious of being different,' says Will. 'He started to feel that people stared at him when he went out in his wheelchair, so he wasn't keen to go out. As soon as Haatchi arrived though, he wanted to come out on his walks with him.'

At school, too, Owen's teachers say that his communication has improved. 'Owen really wants to talk about Haatchi,' explains Will. 'It means he can bypass talking about himself and his condition. He's not the only one in the house with a disability now.'

With his gentle nature, Colleen and Will knew that Haatchi could also benefit others, and he now works as a therapy dog, making regular trips to a local hospital to meet the patients, staff and visitors, who revel in the distraction of a big, cuddly dog.

His amazing companionship hasn't gone unnoticed. In March 2013, Haatchi won the Friends for Life award award at Crufts. Wherever he goes, Haatchi can't help but bring smiles – he even has his own Facebook page, complete with more than 10,000 followers!