How cats and dogs can live happily ever after 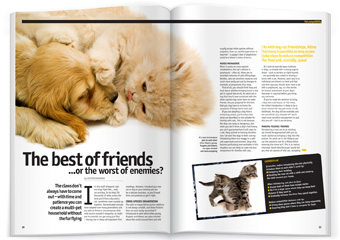 Everyone knows that cats and dogs fight like - well, cats and dogs. But, by following our simple expert advice, you can make sure that they live in harmony together. From the PetPeople magazine archive

On thousands of sofas across the country you'll find a dog and a cat, sometimes even nuzzled up together. Domesticated animals have adapted over many generations and are able to thrive in circumstances their wild cousins wouldn't recognise. So multi-pet households can be harmonious. However, it will take time and patience, and the first meeting is the key.

The age-old feline/canine antipathy is most easily overcome if pets are introduced to each other when young. Puppies and kittens usually accept other species without prejudice. Even so, supervision is required â€“ a playful puppy may scare a kitten.

Cat bites dog?
With cross-species cohabitation, the cat's welfare is paramount - after all, there are no recorded instances of cats killing dogs. And cats are sensitive and more easily put out by changes to domestic arrangements than dogs.

First of all, you consider whether a new pet is a good idea at all. An adult cat or dog that hasn't ever socialised with another species may never learn to make friends. Are you prepared to re-home the newcomer if things don't work out?

When you adopt from a re-homing centre, some dogs are described as not suitable for homing with cats. This isn't because they are dangerous, but when you don't know a dog's full history you can't guarantee how it will react to a cat. Many animal re-homing charities now 'cat test' dogs by introducing them to a moggy in a supervised environment. Dogs that become over-excitable are unlikely to make the best companions for families with cats.

It's hard to override basic instincts in dogs, so breeds with a strong urge to chase - such as terriers or sighthounds - are generally less suited to sharing a home with a cat. However, each dog is an individual. An honest assessment of your dog's character is required before you bring any cat home.

If you've decided to attempt cross-species cohabitation, upon the initial introduction, the dog is likely to be excitable and the cat cheesed off. But, long-term, it can be a success.

Introducing a cat to the household
Introducing a new cat to an existing cat requires as much caution as bringing in a dog - an adult cat is not likely to welcome a fellow feline. This is as nature intended: all species of wild cat, except the lion but including the ancestors of our own domestic moggy, are solitary creatures. They are also territorial and prize personal space above companionship.

Faced with an intruder, cats can become nervous or aggressive and may spray the house to define their territory. Cats are not naturally social creatures and most will function happily on their own, so don't expect instant harmony.

Neutering is the first essential step - as well as the obvious advantage of preventing unwanted litters, it 'will help your cat to better socialise with other felines', says Cats Protection. As with dog-cat friendships, feline harmony is possible so long as you take steps to reduce competition for food and, crucially, space. Consideration and care makes for contented cats.

Introducing a dog to the household
Dogs, by contrast, are highly sociable and love company. 'Being in a stable social group helps reduce anxiety, fear and gives a general feeling of security,' says Dogs Trust training and behaviour adviser Victoria Horsley. But you do need to take into account the individual temperaments, the dogs' previous experiences and how you deal with dogs.

'In general, the best canine pairings are where the dogs are as different as possible,' says Carolyn Menteith, a dog behaviourist and author of Dog Manual (published by Haynes). It works because different types of dog don't compete for the same things.

'If you have a wired, obsessive dog, get a breed that is known for being more laid-back,' she advises.

Siblings can be a bad idea, as they'll be such firm friends that they'll be less likely to form a bond with their owner, making them difficult to train and manage. Same sex dogs are also more likely to squabble than opposite sex pairings.

Every dog is different, however, and common sense is invaluable when getting more than one. Are you going carry one of them home from the park because it can't handle as much exercise as the other? Most importantly, about whether you have the time and space to accommodate the needs of both dogs.

To start with, rabbits and guinea pigs have different dietary requirements. Guinea pigs are unable to make their own vitamin C, and if a rabbit companion eats more than its fair share of fruit and vegetables, the guinea pig will lose vital nutrients.

Also, these two creatures originate from the different continents and would never meet naturally in the wild, and they can't communicate, which can cause confusion and conflict. And rabbits can seriously injure guinea pigs. Peaceable though they are, rabbits have very powerful back legs.

Small animal practice
A bit of natural history can go a long way in a multi-pet household. Syrian hamsters, for example, are solitary in the wild and prefer to remain so in domesticity. Despite their cute appearance, these little creatures can be very aggressive. Rats, mice and gerbils, on the other hand, have complex social networks in the natural world and would be very lonely on their own.

If you have dogs and cats as well as small animals, it's wise to be mindful of the fact that all animals fear their natural predators. Just because you know your cat's a big softie doesn't mean that your gerbil or rabbit will be relaxed about having a confirmed carnivore around, or a dog with a hunter's instinct sniffing round the hutch.

Jon Bowen, a vet who specialises in behavioural problems, is often asked for advice on introducing a cat or dog to smaller animals. The answer is usually 'don't'. Young puppies and kittens can be socialised with other species, but the nature of the beast is to hunt. Even if they seem to be getting along nicely, he says, 'a kitten's play bite can kill.' Its not always easy to read signs of stress in smaller animals, so be sensitive to the fact that all pets need to feel their space is safe.

All responsible pet owners observe, learn and act accordingly to keep our non-human family members happy. This instinct is especially important if you want more than one animal in your home. So long as you remember that we don't live in a cartoon world where all animals are friends, your pets can live happily ever after.