What to know if you are buying a… Maine Coon Cat 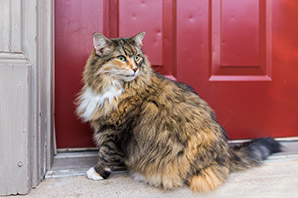 There are many aspects that potential cat owners need to consider before acquiring a cat or kitten and each have their own unique personalities and health care needs.

Petplan takes a look at the origins, temperament and common health problems of the Maine Coon cat...

Origins of the breed:

The ancestral origins of the Maine Coon are shrouded in mystery. However, the most plausible theory is that they descend from the breeding of short-haired cats and long-haired breeds taken to America by English sailors.

The breed is one of the oldest cat breeds in North America and is the official state cat of Maine.

With a distinctive bushy tail and long hair, they were a popular and glamourous entry for American cat shows in the early 20thcentury.

However, as Persian cats began to take over in popularity, Maine Coon Cats faded from the spotlight and by the 1950’s the breed dramatically declined in numbers igniting the creation of The Central Maine Cat Club, who attempted to increase the popularity of the breed.

Today the Maine Coon is one the of most popular cat breeds.

The typical life expectancy of a Maine Coon is between 12 and 17 years.

Maine Coon’s are recognised for their gentle nature and friendliness, hence being the third most popular domesticated cat in the UK.

They are known as the ‘dog of the cat world’ due to their size being typically larger than other cat breeds. They also display loyalty traits, much like a dog would.

Although affectionate they are fairly independent - not demanding and can be very vocal. Like most cat breeds, they love to hunt and chase – so make sure you have lots of toys around the house!

One trait to note is that the male cats are often more outgoing than the female cats, who may be more distant with strangers.

Their coat is often the most impressive trait of the breed – especially their bushy tail!

Therefore daily grooming is recommended (or at least weekly) to prevent matts and hair balls.

Not all cats like being groomed, but starting from an early age will help them become accustomed to it.

Overall, Maine Coon Cats are known to be a sturdy cat, but like all breeds they can be susceptible to certain ailments.

This sometimes manifests itself as limping or lameness, but symptoms aren’t always apparent.

Depending on the severity of the disease, treatment ranges from medical management including exercise, hydrotherapy, anti-inflammatories and pain medication to surgery.

SMA is genetically inherited. If you notice your cat having an unsteady gait or posture, this could be a symptom of SMA. This is due to the loss of motor neurons in the lower spinal cord.

The signs are often most prominent amongst kittens who are about 3-4 months old. Luckily the disease is not painful or fatal and cats can still live a normal life with SMA.

This is a more common disease amongst the Maine Coon cat breed. HCM is a genetic condition that thickens the walls of the heart, restricting blood flow.

Symptoms don’t usually show until the cat is an adult. Some can develop it as early as three years old, for others it can take 6-8 years. Symptoms can include a loss of appetite, short breathing sounds, a weak pulse, and in more serious cases, collapsing and sudden heart failure.

HCM can become really serious, so if you recognise any symptoms, take your cat for a check-up with your vet.

Maine Coon’s can inherit Polycystic Kidney Disease. This is where cysts form on the kidney and cause organ failure. This can be detected by an ultrasound or a gene test. Reputable breeders will breed from cats that have tested negative. Unfortunately, there is no cure, as cysts cannot be removed or prevented from growing, but there are drugs which can minimise the effects and advancement of kidney failure.

As with all pets, it’s vital you have the right insurance to help ensure your pet has access to the best care possible. Visit Petplan’s cat insurance page to see which policy is right for your cat.

Do you have a Maine Coon Cat? Or are you thinking of getting one? Let us know what you think of this friendly and lovable cat…

February 13, 2017 Share via Email Share via Email Share on LinkedIn Share via whatsapp Share on Twitter Share on Facebook Share this article:
Back to top
Nicola Smith
I have 3 maine coons. The oldest is 11 years old and has arthritis which makes him grouchy but he is still a mummy's boy. The other 2 are 9 months old and very loving, the boy in particular thinks he is a dog and plays happily with our German Shepherd.
Posted on: February 26 2017
Natasha
We had a beautiful Maine Coone, Totto who sadly we had to have put to sleep in December last year due to HCM disease. The disease took him far too young ((7) and very quickly. We are devasted by the loss of him and miss him so much. Thank you for raising awareness in your post of this condition. It would be great if you could make owners aware of the disease in your magazine too? That way owners can remain vigilant.
Posted on: February 26 2017
www.T.com
Skype has established its website-structured consumer beta to the entire world, right after introducing it generally inside the Usa and You.K. before this four weeks.Skype for Website also now can handle Linux and Chromebook for instant messaging communication (no video and voice however, individuals demand a plug-in installation).The expansion of your beta contributes assist for a longer set of languages to aid strengthen that worldwide usability
Posted on: June 27 2017