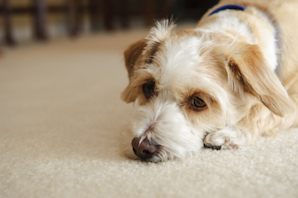 Many people are now returning to work after time at home over the festive period - but dog owners could find that their pet finds the long periods alone traumatic, resulting in problematic behaviour that needs to be tackled. Inga MacKellar explains all. From the Petpeople magazine archive

What is separation anxiety?
Separation anxiety is commonly seen in dogs, which are social animals. When left alone, some dogs can become destructive, poo indoors, excessively salivate, pant and pace, or bark and howl. This can occur for a variety of reasons, such as boredom, a lack of house training or because they have been stimulated or frightened by something outside. However, it can be due to anxiety at being separated from their owner.

Why does it occur?
It occurs with dogs that are used to having human company and can't cope with the solitude and separation if left alone. It can affect any breed and at any age, but typically occurs in dogs that are over-attached to the owner, often following them around the house - even to the bathroom. Rescue dogs can be susceptible to this problem as new owners often take a couple of weeks off work to help the dog settle in. The owners spend all their time giving the dog lots of attention and then, suddenly, the situation and routines are totally changed when the owners return to work and the dog can't cope. Even dogs that have been owned from a puppy can develop separation problems, particularly if they are owned by and spend all their time with one person.

Things to try
Many people mistakenly think that getting another dog will help, but it rarely does, as the problem is due to the owner/dog relationship. To prevent serious separation problems developing, dogs need to be trained to get them used to being periodically separated from their owner while he or she is at home. Dog gates are useful, as they enable the dog to be physically separated from, but still see, the owner. Over time, the room door can be gradually closed so that the dog gets used to being separated from its owner behind a solid door. Leaving a radio/TV on or a recording of the owner's voice may also help. There are also a number of 'calming' products available, such as Adaptil, Zylkene and Serene-Um. If the dog has soiled indoors or been destructive when left alone, it must never be told off as this may increase its anxiety.

If it gets very serious:
Some dogs can become so distressed that they may cause damage to themselves, or to doors and window frames, as they try to follow their owner out of the house. In this case, veterinary advice should be sought for a referral to a qualified behaviourist. In some instances, drug treatments may be necessary.

January 09, 2012 Share via Email Share via Email Share on LinkedIn Share via whatsapp Share on Twitter Share on Facebook Share this article:
Back to top
Handling Your Dogâ€™s Separation Anxiety
[...] to increase the time you spend away until you can leave for a full eight hours with no problem!How many times have you experienced going out of the house and you come back to a big mess. And ther...and â€œsweetâ€ you really need to do something about it. Separation anxiety can lead to more [...]
Posted on: May 17 2012