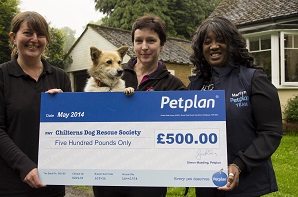 The winner of Petplan’s monthly £500 Charity prize draw for May was Chilterns Dog Rescue Society – and they are a hugely deserving charity.

Founded in 1963, they have rehomed more than 18,000 dogs and continue to do amazing work at their premises in Chivery, near Tring.

We spoke to Rescue Centre Manager, Sara Muncke, to find out more about the charity and the work they do…

“We’re all delighted to have won the prize. It’s really lifted everybody’s spirits to know that we’ve been considered in this way.”

How long have you been involved with Chilterns Dog Rescue Society?

“I’ve had a passion for dogs my whole life and have worked in rescue homes for more than 40 years.

“I’ve always had rescue dogs at home and try to help ones that are considered more challenging because of their mental or physical health.

“I started working full time for the charity back in 2000 and still love working here and trying to make a difference to the lives of the dogs we see.”

What has the money been used for?

“The money came at the perfect time for us. We’ve recently had two dogs come into us – Ricky and Betty – who both needed a lot of care.

“Ricky suffered abuse that left his spine fractured and his tail paralysed, while Betty is recovering from a broken hip after being thrown from a moving car.

“The money has been used to help with their rehabilitation and to help find forever homes for them once they’ve fully recovered.”

What are the plans for the future?

“We’re currently undergoing a renovation and expansion so it’s going to be a very testing time. We’re having to close certain areas and move operations to other places which takes a lot of planning.

“It’s an exciting time though and hopefully it will mean that we can help even more dogs in the future.”