The best pet song: what gets your vote? 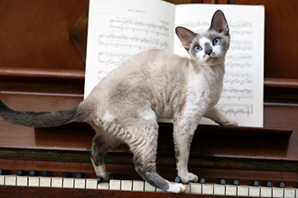 It goes without saying that we love our pets, and by association are delighted by anything featuring our furry friends.

From the big screen, like the tear-jerking Marley and Me or the heart-warming Homeward Bound, and page-turners such as My Family and Other Animals and Watership Down (read our blog posts on the best pet films and top pet reads), to the world of music, our four-legged companions are often in the limelight.

Big names in the music industry have waxed lyrical about animals for a long time. Freddie Mercury loved his pet cats and missed them so much when he was touring that he would ring home to talk to them. They often provided inspiration for his music - he penned Delilah for his favourite tortoiseshell. Similarly, The Beatles' Martha My Dear, was inspired by Paul McCartney's love for his Old English Sheepdog. But let's not forget other classics like (How Much is) That Doggie in the Window recorded by Patti Page in 1952, and the hugely popular hits like Tom Jones's What's New Pussycat?, and Elvis Presley's Hound Dog. The list goes on.

Pets have provided musical inspiration for decades, and we want to know what you think should be named the best pet song? It's a topic of hot debate, so have your say here.

Post the song that gets your vote in the box below.