The facts about feline asthma and how to treat your cat 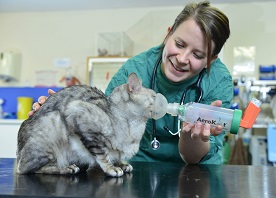 It’s estimated that around 85,000 cats in the UK suffer from asthma but, despite the large number of feline sufferers, it can often go undiagnosed for many years.

Petplan vet Brian Faulkner explains exactly what feline asthma is and how to ensure your cat gets the best treatment, while Petplan customer, June Leckie, tells us the story of her asthma-suffering cat, Stan...

WHAT IS FELINE ASTHMA?

Feline asthma is extremely similar to the human strain in terms of causes, symptoms and treatments.

It is caused by the small passageways of a cat’s lungs becoming chronically inflamed. Asthma attacks occur when these passageways thicken and constrict even further, making it difficult for the cat to breathe.

Brian says: “The exact cause of feline asthma isn’t totally understood. In some cases it can be an allergic response to an irritant, but for others no allergic cause can be found.

“It’s believed by many vets that feline asthma is becoming more common in the UK due to increased pollution and the rise of indoor cats – Petplan paid out £1.6m worth of respiratory system disorder claims in 2012.”

Successful management of the condition allows many domestic cats to lead a normal life.

Around 10 years ago, inhalers and nebulisers were created specifically for cats. That means they can now be treated effectively by their owners with a minimum of fuss in their own home.

Stan, a six-year-old Snow Bengal cat from Glasgow, is one cat who has benefited from these relatively new developments.

He was rushed to the vet by his owner, June Leckie, in July last year as he was struggling to breathe. They found no foreign object blocking Stan’s airway and ordered a scan which revealed he had asthma.

Stan was able to go home nine days after his problems and now leads a normal life thanks to his new inhaler which he has to take twice a day.

June said:  “We were so fortunate that we had Petplan insurance as they covered all the costs for his treatment and stay in hospital which totalled nearly £3,000 – we don’t know what we’d have done without Petplan’s help.

“Since his treatment Stan has been like a different cat, so much more affectionate and I think this is simply down to the fact that he feels so much better, it is wonderful to see him so happy!”

If you suspect your cat might have asthma, it is important to speak to your vet to obtain an accurate diagnosis. Symptoms to look out for include wheezing, coughing and laboured breathing.

Does your cat have asthma? Can you offer any insight into what it’s like to live with a cat with asthma? Tell us your story below…

Share via Email Share via Email Share on LinkedIn Share via whatsapp Share on Twitter Share on Facebook Share this article:
Back to top
Jordan Walker
Thank you for sharing us these helpful facts about feline asthma. My mum has a cat and I think it has an asthma but I have not confirmed it yet so after reading this I will ask her to check her cat by a vet.
Posted on: May 14 2014
melissa lever
My cat bagpuss has asthma. I use the inhaler twice a day. Bagpuss is a everyday cat the inhaler helps him keep active. I find that household sprays, deodrant, dusty cat litter and dust cause bagpuss asthma to start up, so I try not to use them around him. I also vacuum regular to keep the dust at bay.
Posted on: June 03 2014
Emma
My cat Ebony has asthma, I found the tablets the vet put her on help her, she comes to seek out her tablets on a morning so they must help her feel better.
Posted on: June 05 2014
Diane
My cat Rosie has asthma. Her character is unique (I had four cats at one time) and was difficult to do anything to if she didn't want you to. So although I have asthma so I'm used to inhalers I was apprehensive about giving Rosie one but she is great as soon as I shake the inhaler she jumps up on her scratch post waiting for it.
Posted on: June 25 2014
GEORGE TOLL
I HAVE JUST STARTED TREATING MY CAT WITH AN AEROKAT INHALER WITH FLIXOTIDE..HOW CAN YOU JUDGE WHEN THE FLIXOTIDE EVOHALER IS EMPTY,ANY TIPS.THANKS.GEORGE
Posted on: April 04 2016