The growing trend of dogs in the workplace 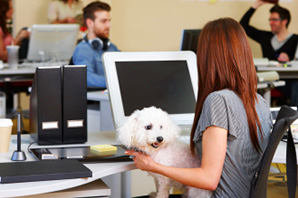 Recent research has shown that taking your dog to work can have positive benefits on the workplace. Kath Stathers looks into this growing trend of canine companions at work.

It's tough being separated from your dog for the whole working day. Quite apart from the guilt of leaving a dog all lonely at home (not to mention the recommendation not to leave them for more than four hours at a time), or the expense of a dog walker, it also means you rush off when the clock strikes 5pm to let Fido out for a widdle.

More and more companies are allowing dogs in the workplace. In Silicon Valley it's almost de rigueur - Google and Amazon both champion the doggie-friendly office - and more than 2 million dogs in the States now accompany their owners to work.

Dogs Trust UK - which itself enjoys plenty of four-legged company in the office - believes that dogs in the workplace can improve health and wellbeing. And this is backed up by academic research that has shown that dogs reduce stress in the office, lead to greater job satisfaction, and produce better team bonding. This is because stroking a dog triggers a release of oxytocin in our brains, a hormone which promotes trust.

One London-based digital agency, Made By Many, has given its office-dog, Tilly, a job title 'Strategy Dog' and she appears on the staff page of its website. "People do seem to enjoy the release mechanism of having a quick play with Tilly," says Tilly's owner, Isaac. "But I worry about her getting too much attention and becoming a bit of a princess. In fact, I've had to set rules about when my co-workers can play with her."

Rules aren't a bad idea not just for co-workers who might feed your dog endless biscuits, but for the owners and the dog too. "You need to make sure your dog has somewhere quiet and comfortable to sit, access to clean water and a walk during the working day," says Sophia from pet charity Blue Cross. "Also make a plan with your colleagues so that you know who will keep an eye on your dog if you have to leave him temporarily."

Not all dogs will be appropriate office dogs, if you've got a bouncy new puppy who chews up furniture, or an over-protective pet who has been known to go for the postman, your colleagues probably won't welcome their presence in the workplace. "It's important to be realistic about whether your dog can come to work with you," says Sophia. "And keep an eye on how they take to it too. Some dogs may feel overwhelmed by the extra attention they receive causing them to become stressed. In which case he might pant, yawn lots or lick his lips. If you see these signs, ask colleagues to give him some space."

At Blue Cross it has become so popular for owners to bring their dogs into work that they now have to have a rota for whose can come in when. So if you're thinking of asking your boss if you can bring your dog into work, make sure you're ready for all your colleagues to ask the same question too.

Does your workplace let staff bring dogs to work? Post your thoughts in the box below.