The History of Pets, part 3: Rabbits 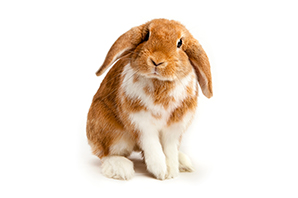 In the last of a three-part series, writer and pet-lover Julian Hall looks at the history of rabbits...

Used as a source of food for many centuries, rabbits took a lot longer than cats and dogs to become a popular choice of domestic pets. However, they have more than made up for this awkward start and have bounded into our affections in a very real way.

Did you know that the 60 breeds of domestic rabbit that populate the globe today are descended from the species that evolved in the 'land of rabbits'? Some language specialists say this was the original name for the Spain, where the European wild rabbit came into being 4000 years ago on the Iberian Peninsula.

Hopping forward in time, the Roman occupation of Spain around 200BC saw rabbits farmed for their meat and fur - and the animals were first brought to Britain by the Romans after they invaded in 43AD.

Fifth-century monks living in the Champagne region of France are credited as the first people to domesticate rabbits, keeping them caged to use as a convenient food source. These monks were the first to breed rabbits selectively, changing size, shape and fur colour.

During the Middle Ages rabbit farming for meat and fur expanded across Europe including Britain. Documentary evidence notes that some noblewomen from the time started to keep rabbits as pets.

Regional variations of breeding began to produce distinct types such as the Flemish Giant (first known as the Ghent Giant) which dates back to the 16th Century and the 18th Century French dwarf breed, the Lapin de Nicard, weighing just 1.5kg.

The continued domestication of rabbits was a very middle class pursuit. Often families who moved from the country to the new burgeoning towns saw the rabbit as a 'portable', nostalgic link to their past. By the Victorian era, new breeds were being exhibited as show animals.

The journey of the rabbit to being the third most popular pet underwent a kind of 'one hop forward, two hops back' movement during the first and second world wars, both in the UK and the US, when governments encouraged rabbit ownership for the purposes of providing food and clothing. In both countries after the wars, however, rabbits transitioned between resources to pets.

Because of their sprightly and nimble nature, rabbits are often portrayed as 'tricksy' types in popular culture, indeed this notion stretches from ancient African tribal folklore through to Bugs Bunny.

The Aztecs had four rabbit gods who were associated with revelry and fertility, and this link with fertility has endured with 'bunnies' used to represent new born babies and early childhood. Vietnamese culture, in particular, stresses the rabbit as a symbol of youth and innocence.

The association with luck - namely the symbol of the rabbit's foot - is common across the world, though there is one notable exception in the UK, on the Isle of Portland in Dorset. Quarrying was once common on the island and quarry workers could find themselves at risk if rabbits had weakened the walls with their burrows. Rabbits have since been referred to here by euphemistic names such as 'long ears' or 'underground mutton', it being considered too unlucky to mention them by their proper name!

Given the use of rabbits as an easy source of food and clothing, it has taken them a little longer to become recognised as a domestic companion, but now rabbits have joined cats and dogs as exactly that. Less regarded as simply a children's pet, owners have become more attentive to the care requirements of our floppy-eared friends and ensured that they have vaccines and other necessary medical treatments. Insurance is as important for rabbits as it for other pets, and this is why Petplan have policies that protect against the expense that may be incurred to treat serious illnesses such as Fly Strike and Coccidiosis.