The importance of microchipping your pet 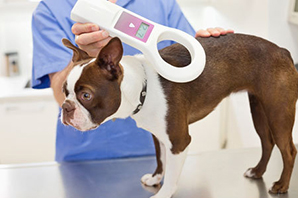 Nobody wants their pet to go missing, but if the worst happens it is commonly agreed that microchipping is not only the mark of a responsible owner, but provides the best chance of owners and pets being reunited. Writer Sue Corfield discovers two cases where thanks to microchipping, missing pets have been found.

Last year Poppy, a Staffordshire Bull Terrier, was found by a dog warden service approximately 30 miles from her original home after being missing for eight years. The circumstances leading up to Poppy's disappearance led her owner, Claire Hackett to believe that her lovely dog had been stolen: Poppy had been happily playing in their secure back garden, but when Claire returned just a short while later she found a fence panel had been removed and her dog was missing.

After almost a decade without their dog, many people would have given up hope of ever finding them. But Claire always felt she would one day be reunited with Poppy and her optimism was rewarded when she received the call she had longed for.

Dog warden, Nigel Stephens was called out to a busy by-pass by a member of the public who had found Poppy at the side of the road. When collecting the dog he scanned her as a matter of course and was delighted to discover she was microchipped and could be returned to her delighted owner Claire.

Earlier this year a Pomeranian dog called Henry was stolen before his owner Verity Phillips's eyes. Out walking Henry, he was set upon by another dog. Horrified, Verity managed to stop the attack but accidentally released a terrified Henry, who took off. Verity gave chase and as she turned the corner, she saw a man reach out and pick him up. Her relief that someone had caught him turned to horror as she watched the man put Henry into his van and drive off. Distraught, she reported the incident to the police. Weeks later, Verity received a call saying that a dog, similar in appearance to Henry, had been sighted at a property the police were about to raid. Once rescued, the dog was scanned for a microchip and they were able to confirm that the dog was, indeed, Henry.

Microchips are essential in making sure pets are reunited with their owners, helping to reduce the number of pets in welfare centres and waiting to be rehomed. And in 2016 microchips will be compulsory for dog owners, a legislation formed in an attempt to ensure that all dogs can be traced back to their owners. This follows an announcement by government ministers that dog owners will face fines of up to £500 if they don't get puppies and dogs microchipped.

After microchipping your pet it is essential to keep your contact information updated; if you move house for example, you need to make sure your microchip supplier is informed. Costs for microchipping vary but are generally in the region of £10-£25. Many animal rescue charities provide a free or subsidised service.

Petplan works with Tracer microchippers to provide dogs, cats and rabbits chipped through them with 4 weeks' free Petplan insurance. Other Petplan partners include Animal Care and Pet-ID. Read more about why microchipping is essential from vet Marc Abraham in previous Petplan blog post.