The Secret Life of Pets: Max has to learn to get along with Duke. How should you introduce two dogs to each other for the first time? 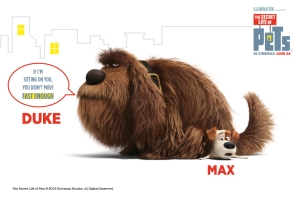 The new comedy The Secret Life of Pets, which is in cinemas now, shows what pets get up to when their owners’ backs are turned.

One character is Max, a pampered Terrier who struggles to adapt when his owner brings home a giant, hairy rescue dog named Duke. Max’s perfect life is totally upended, as he is forced to share, not just his home but his owner’s affection.

Most dogs are very sociable and will welcome a new friend to play with. However, introducing a new dog into the household can sometimes be tricky!

Petplan is delighted to be a brand partner for the film and explores the best ways to successfully introduce your dog to a new dog.

It’s best to host their initial meeting on neutral territory that’s unfamiliar to either of them. Introducing a dog into the others territory could lead to confrontation.

Have both dogs on leads and make sure that you and whoever is holding the other leash are both relaxed and calm – holding the lead loosely. Tension on the lead could communicate that you are anxious or fearful.

Walk side by side in the same direction, far enough away from each other so that the dogs can’t touch. This will allow them to become accustomed to each other’s presence. Then allow them to cross paths, so that they can smell where the other has walked.

Now it’s time for them to properly meet! Let them approach each other, both on leads just in case things don’t go exactly to plan.

They may sniff each other, bark a little, and posture. Teeth baring, air snaps or growling could also occur.

Try speaking over the top of this interaction in a soothing and calming tone.

In the event that it does become aggressive, separate them. Allow a cooling off period and then try again, stating from the first phase again, this time taking each step slower.

Let them get better acquainted

If so far so good, then remove their leashes and allow them to become acquainted.

Try to not fuss over them, as it can unnerve them and ruin the meeting. Step back and let them work each other out at their own speed.

Take things back to the house

Once you have passed these stages successfully, it’s time to take them home. It’s best to transport them separately to avoid conflict.

Make sure that all toys are put away beforehand, so that they don’t fight over them, and feed them separately.

As they get more accustomed to each other and become friends, you can re-introduce toys and feed them together.

If things don’t quite go to plan with the introduction and you are concerned about their relationship, then it is always worth consulting with your vet or a pet behaviourist to ensure both dogs stay happy and healthy.

Have you introduced another dog to your family’s dynamic? Do you have any tips to share? Let Petplan know in the comments below…