What to know if you're buying a… Labradoodle 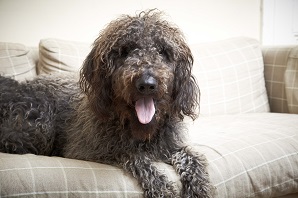 There are many aspects that potential dog owners need to consider before acquiring a dog or puppy and each have their own unique personalities and health care needs.

Petplan takes a look at the origins, temperament and common health problems of the Labradoodle…

With a cross of two of the most intelligent breeds, the Labrador and the Poodle, the Labradoodle was originally used as an assistance dog.

Due to their hypoallergenic coats which rarely shed, it was soon recognised that the Labradoodle was the perfect solution for people who wanted a clever and friendly dog without having to worry about having their allergies triggered.

The typical life expectancy of a Labradoodle is between 12 and 15 years.

With a double dose of intelligence and friendly genes to boot, the Labradoodle can make a great companion.

With a deep intuitive nature they love to be in an active environment with lots going on to constantly stimulate their inquisitive minds.

Labradoodles are perfect family pets as their gentle, friendly natures work well with children and can cope well in busy environments. They do however become easily restless, and as with all dogs shouldn’t be left home alone for long periods.

They are usually easy to train and learn quickly. Introducing them to different environments and sounds at a young age helps them adapt to situations with ease.

How much exercise does a Labradoodle need:

A Labradoodle is a very active animal so requires around two hours of exercise a day. Typically, Labradoodles like nothing more than chasing a ball around the park.

Overall, Labradoodles are well rounded healthy dogs, but as with all animals they can be prone to developing certain health conditions.

This is a hereditary disease where the ball and socket of the hip joint is malformed – resulting in the ball and socket not fitting snugly together and subsequently grinding and rubbing against each other – causing pain and discomfort. This sometimes manifests itself as limping or lameness, but symptoms aren’t always apparent.

Depending on the severity of the disease – treatment ranges from medical management including exercise, hydrotherapy, anti-inflammatories and pain medication to surgery.

As with many dogs with floppy ears, Labradoodles commonly contract ear infections as the moisture becomes trapped in their ears causing bacteria to form. Dogs suffering from an ear infection may shake their head and scratch their ears more than usual due to discomfort.

Take your dog to the vet if you suspect they may have an ear infection, whereby a course of antibiotics will likely be administered.

Labradoodles can be prone to Progressive Retinal Atrophy (PRA). This consists of a slow disintegration of the retina. Dogs initially only become night-blind, but this progresses to blindness in the daytime too.

Unfortunately, there is no cure or treatment for the condition, but dogs can adapt well to progressive blindness and perform normally in their environment. It’s only when the furniture is rearranged or they are in unfamiliar surroundings that blindness may be more evident.

These are usually seen in dogs under the age of three (especially in Labradoodles) and can be triggered by irritants such as:

Your dog will usually itch and chew at their back towards the tail. In some cases, they will chew the tops of their tails if they are unable to reach with the area over the pelvis being the most problematic. You may also notice your dog chewing their front feet or rubbing their faces on the carpet due to their ears or lips being itchy.

It’s important to know there is no quick fix and identifying the cause can take time – treatment is likely to be more about long-term management rather than finding a cure.

Your vet may suggest allergy testing (via a blood test) or eliminating things individually from your dog’s environment until the culprit is identified (typically used when food allergies are suspected).

Seasonal allergies (like certain pollens) may be treated with medication, while other options include immunotherapy whereby once the allergens have been identified (through allergy testing) a specially prepared injection containing altered allergens are injected under your dog’s skin, with the aim of de-sensitising your dog’s response over a period of time.

This is typically used in cases for dogs where avoiding the allergen is impossible or symptoms happen for long periods of time.

Do you have a Labradoodle? Or are you thinking of getting one? Let us know what you think of this friendly and intelligent dog...

Share via Email Share via Email Share on LinkedIn Share via whatsapp Share on Twitter Share on Facebook Share this article:
Back to top
Jean Hydleman
Since when was a labradoodle a breed? And any health problems are because of what comes from the parents who are often from stock considered not good enough to breed as pure breds. I see a lot of larbrador x poodles and there seem to be a lot of skin allergies around - something you did not even mention
Posted on: November 08 2016
Petplan
Hi Jean, thank you for your comment. We took your advice on board and have now updated our blog to be more accurate when referring to the cross breed. We have also added a section on skin allergies which we hope will provide further information on this issue. Thank you for bringing this to our attention. Steph - The Petplan Team
Posted on: November 15 2016
Nichola Lack
I dont agree that pure breed stock is not good enough so people cross breed. Many crossbreeders use wonderful healthy breed standard dogs. They breed the cross as its what they like. I would also mention that both parents of either breed should be health tested. NOT a simple vet check but testing specific for each breed and most certainly for the issues that are prone in both breeds.
Posted on: November 22 2016