My dog saved my life

Find out how these dogs' amazing actions helped to save lives, and what their behaviour could teach you about your own pet.

Last year, when dog-walker Guy Jenner and Dave, his Labrador, took a stroll along the beach at Hayling Island in Hampshire, they had no idea that they'd be faced with a rescue mission. Teenager Poppy Godliman had been swept out to sea at the entrance to Langstone Harbour and, when her cousin Keira and mum Nicola swam out to help her, they got stuck too. Dave used his powerful muscles to help tow them back to shore. 'I've never been in a situation where I haven't been able to help my children,' Nicola said. 'I'm eternally grateful to Dave.'

Dr John Bradshaw, an anthrozoologist and research fellow at Bristol University veterinary school, isn't surprised to hear that Dave is a Labrador. 'Gundog breeds have very strong instincts to retrieve, even from the water. Over the years, breeding has helped to hone this trait, but it stems from a wolf's habit of bringing food back to the den,' he explains. 'And the “pack instinct” wolves display has also evolved into our dogs' tendency to form strong attachments to people. So Dave seems to have combined his desire to look after his pack (humans), with his talent for retrieving.'

Practising the skill of retrieving with your dog can be fun and rewarding, whatever his breed. To ensure he gets the most out of it, why not try a simple scentwork game? For example, you could use a favourite toy or a ball. After a few moments of playing with object, hold your dog as you throw it into grass that's thick enough to lightly disguise it. Once the object has landed, count to three before releasing your dog and allow him to seek it using his nose. As your dog gets better at finding the object, you can increase the time before releasing him and the heaviness of the cover. But remember, it's also important to teach your dog a 'leave it' command, and to train him to drop an item when it has been retrieved. 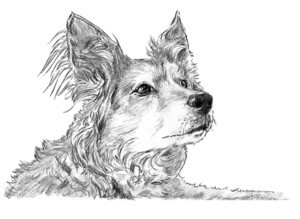 When Max, a lovable and lively Collie-cross from Rugby, started acting oddly around his owner, Maureen Burns, she took his anxious behaviour seriously – especially when he kept sniffing her breath and nudging her left breast. Having previously had a non-cancerous tumour removed from her breast, Maureen checked herself thoroughly and found a small lump. This time, it turned out to be breast cancer. After an operation and radiotherapy, Maureen recovered successfully and remains convinced that Max had saved her life.

'Humans talk about what the world looks like, but dogs rely first and foremost on what it smells like,' explains Dr Bradshaw. 'Dogs don't necessarily understand what cancer is, but they are almost certainly reacting to a change in their owner's odour. But, while dogs have been successfully trained to detect particular medical conditions, such as bladder cancer and diabetes, we shouldn't rely on them to detect all cancers as each type of tumour could produce a different smell.'

Max's story shows that it's worth paying attention to any changes in your pet's usual behaviour. While it may not be pointing to an issue with your own health, it could be your pet's way of telling you that he is in pain or feeling stressed about a change in his environment. If the behaviour persists, even with some extra attention from you, play it safe and book an appointment with your vet.

If it wasn't for a stray dog's help, a dream holiday could have turned into a nightmare for Georgia Bradley from Cornwall. When two men approached her on a deserted beach in Crete, she politely declined their offer of a cocktail. But the men didn't take her refusal well, and one grabbed her by the arm. Thankfully, a young dog that had been on the beach saw what was happening. Her protective canine instincts kicked in, and she started barking until the men moved on. 'She saved me,' said Georgia. 'She must have noticed something was wrong.'

Dr Bradshaw agrees, and adds that dogs are very sensitive to human body language: 'They may react excitably when people argue or fight nearby, barking, running around and even attempting to bite.'

This story had a particularly happy ending. 'When I got home, I couldn't stop thinking about that stray, so I took a flight back to Crete two weeks later,' said Georgia. And, with a bit of persistence, she was able to bring the dog back safely to Cornwall where she named her Pepper.

Your dog is highly attuned to your body language, but might not always be able to distinguish between play fighting and real aggression. Raised voices can sound alarming, even when used in excitement, and games between children (or even adults!) could result in an accidental nip. Always think of how your dog might perceive your behaviour, and try to maintain a calm environment where your pet feels safe and secure.