Are you feeling controlled by your cat? 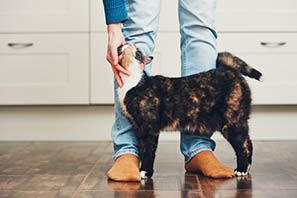 Are you feeling controlled by your cat. Discover from Animal behaviour experts Dr John Bradshaw and Claire Bessant on cats ability to control human minds.

Cats are clever enough to take advantage of their owners’ habits and routines. If a cat recognises that you’re willing to get out of bed and feed him when he makes some noise, you can expect him to continue to insist on it.

‘It’s not that cats are trying to get one over their owners,’ says Claire Bessant, chief executive of the charity International Cat Care (formerly the Feline Advisory Bureau). As author of several books on cat behaviour, including The Cat Whisperer, she is well placed to explain their power play.

‘It’s really important for cats to know what’s happening next, because it makes them feel secure,’ says Claire, who reminds us that the cat is an essentially solitary, territorial species. With no pack for support, a safe, predictable environment is paramount. So this ‘controlling’ attitude is simply an expression of natural instincts.

The next time your puss turns on his most imploring sound effects, bear in mind that he’s not making the imperious demands of a boss. He’s expressing his confidence that you want him to be happy. Claire says: ‘Owners should be pleased if they have good communication with their cat. If they’re doing something the cat needs, they’re actually being sensitive to what their pet is telling them. We can pretend that we’re being used and abused, but most of us love it, especially if we get a purr as a reward.’

She adds that this doesn’t mean letting cats get their way in everything. ‘You don’t have to indulge them totally. If you don’t want your cats sleeping on your bed, don’t allow it, as long as they have somewhere else cosy.’

Nor should we assume that our cats only make a fuss of us when they want something. Animal behaviour expert Dr John Bradshaw of Bristol University says: ‘Cats display attachment to their owners that transcends mere cupboard-love. It’s seen in behaviour such as rubbing, purring and licking, which cats use to cement bonds.’ Surely that makes it all worthwhile?