Black cats: separating the myths from the facts 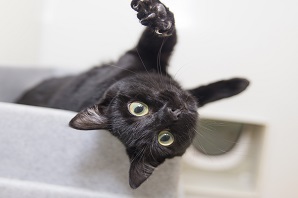 Black cats are sleek, dazzling and dressed with a coat to impress.

However, black and black-and-white cats made up 45% of the total cats coming into Cats Protection’s care during 2015, and on average, took 22% longer to find a home than cats of other colours.

For centuries, black cats have played an important role in superstition, mythology and folklore – with many of these superstitions continuing to this very day.

In fact, in a survey conducted by Cats Protection in 2015, it was found that, rather than dying out, some myths about black cats being unlucky have some currency with young people. Twelve percent of those surveyed aged 18-24 said that black cats were unlucky, while only 2 per cent of over 55 year old people did.

Petplan takes a look at the origins of black cat superstitions and separates the myths from the facts.

Why is crossing paths with a black cat considered bad luck?

Black cats weren’t always the subject of superstitions or thought of as bad luck.  In fact, dating as far back as 3000 BC, the Egyptians held cats (including black cats) in high esteem, and to kill one was considered a capital crime.

It was in the Middle Ages in Europe when black cats glorified status started to crumble, as they became associated with witches.

It was thought that black cats were the cause of bad luck, as they were reincarnated witches in feline form. The hysteria of witches practising black magic struck European cities during these times, and alley cats were often cared for and fed by these poor and lonely ladies who were later accused of witchery.

This is where the idea began to develop that if a black cat crosses your path, something bad will happen.

Black cats are considered lucky in some cultures

In some parts of the world black cats are actually considered to be good luck.

Cats Protection’s annual celebration of black and black-and-white cats is happening on the 27 October. This celebration aims to acknowledge the uniqueness of black cats and focus on what makes them individually special. After all, beauty is more than fur deep.

Black cats are beautiful and Petplan is delighted to partner with Cats Protection to highlight that black cats are neither bad luck, scary or boring!

Do you have a black cat? Let’s celebrate them! Please share your stories below…