Do pets really have emotions? 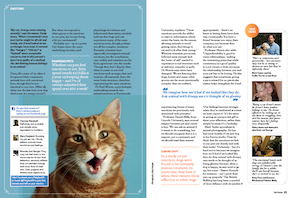 It's hard to tell how our pets are feeling. Do they feel emotions as complex as ours? Or are we overly attentive to how they feel? Deirdre Vine investigates. From the new issue of PetPeople magazine

'My cat, George, went missing recently,' says his owner, Daisy Jones. 'When I mentioned I was worried he might be afraid and lonely, one friend looked at me as though I was mad. It seemed like 'hungry', 'thirsty' or 'injured' were acceptable concerns; but in this person's eyes I was guilty of a cardinal sin: attributing human feelings to an animal.'

Daisy, like many of us, takes it for granted that companion animals have rich emotional lives, though they're not identical to our own. (After all, when was the last time your dog shed a tear at a weepy movie?) But when we respond to what appear to be emotions in our pets, are we just being a bit too sentimental?

Probably not - up to a point. Our brains share the same underlying circuitry, and physiological evidence and behavioural observation certainly indicate that dogs and cats experience many of the same emotions as us, though perhaps not all the complex variations. Recently, scientists have rigorously investigated animals' emotions, but the conclusions vary widely and scientists are far from agreement over the results. Though they don't dispute that, when it comes to survival emotions such as anger, fear and surprise, all mammals share the same brain structure, therefore experiencing the same emotions.

Dr Paul Morris, a psychologist undertaking research into animal emotions at Portsmouth University, explains: 'These emotions provide the ability to react to information which enters the brain via the senses, allowing animals to avoid getting eaten, find things to eat and look after their young.' Whereas scientists previously believed most animals lack the 'sense of self' needed to experience social emotions such as jealousy, empathy or guilt, Dr Morris says views have changed: 'We are learning that dogs, horses and many other species are far more emotionally complex than we realised, experiencing forms of many emotions we previously only associated with primates.'

Professor Daniel Mills, from Lincoln University, says mutual respect between pet and owner is key: 'We can ask an animal if it wants to do something, but we should recognise that it is a request, not a command, and we should read their answer appropriately - there's no harm in letting them have their way occasionally. You have a friend because you enjoy their company, not because they do what you say.'

Dr Morris also adds: 'Unpredictability is good in some relationships,' making the interesting point that while consistency is a good quality in a pet owner, it does not mean the relationship between you and your pet has to be boring. He also suggests that sometimes giving a pet a reward for no particular reason helps strengthen the bond: 'Our feelings become stronger when they're reinforced at a time we least expect it. It's the same as giving an unexpected gift to show your affection, rather than simply because it's a birthday.

Mark Taylor specialises in animal photography. He has had most breeds of cat and dog in his Surrey studio. Does he think that the emotions we link to our pets are closely tied with their looks? 'Definitely - but it's hard not to because we imagine how we'd feel if we looked like they do. Any animal with droopy ears tends to be thought of as being gloomy because when a dog is happy, its ears tend to go up, but some - Basset Hounds for instance 'can't prick their ears up properly.' The British Bulldog has long been a symbol of dour defiance with its sombre expression, yet on a recent shoot, Mark found them to be 'amazingly playful with lovely, obliging natures.'

And what about rabbits? Dr Margo DeMello, who lives in New Mexico with her husband, four Chihuahuas, a cat, a parrot, and over 50 house rabbits, is president of the International House Rabbit Society. She explains: 'There's no question that rabbits, like all other mammals, have emotions like joy, frustration, jealousy, anger, rage and sadness. My rabbit expressed his sadness after his girlfriend died through rage - he destroyed everything and dug a big hole in the living room wall. It wasn't until he got his current girlfriend that his rage went away at last.'

None of us can truly know how another animal feels, but many believe that animals do have emotions. Dr Morris says: 'Pet owners should have the confidence to believe they have a genuine relationship with the animal. Don't be affected by the sceptic who scoffs at the notion that a pet has a deep affection for its owner, because I really think they do.'