Five great games to play with your dog 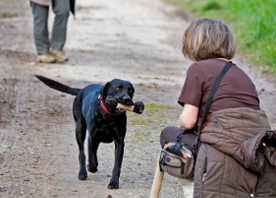 Playing regularly with your dog will keep him stimulated, teach you about his personality and strengthen the bond between you.

‘All dogs enjoy different games, so working out which kind he enjoys and the rewards he responds to is the first step,’ says Ali Taylor, Head of Canine Welfare at Battersea Dogs and Cats Home. ‘Border Collies like to chase toys and bring them back, while a Springer Spaniel will enjoy interaction based on searching for a toy.

‘But all play is important to dogs as it keeps them physically and mentally stimulated, and less likely to become bored and frustrated, so you’ll have a more obedient dog.’

Ali suggests avoiding rough-and-tumble wrestling games – which can over-excite your dog – and organising play in short bursts of up to 10 minutes, about three times a day, and always finishing while your dog is still keen to play.

It’s also sensible to use lots of praise and encouragement, and begin a game when your pet is sitting or lying down, as this encourages good behaviour.

PETPLAN'S 5 BEST GAMES TO PLAY WITH YOUR DOG

1. Coming… ready or not
Enhance a normal game of fetch by introducing some of the techniques used when training search dogs. Hide his ball or another favourite toy somewhere so that he has to work by sniffing to find it. Then guide him into the area, watching him follow his superb sense of smell until he finds the toy.

You could also try hiding when he’s not looking and then call him. As soon as he finds you, praise him and give a food treat. You can play this hide-and-seek game with his favourite food treats, too – try hiding one under a line of plastic mugs and see if he can sniff it out. He’ll be using his nose and his concentration, so this type of game is a great sense stimulator.

2. Temptation alley
This game is good for getting your dog to come to you on demand. It’s also great fun and dogs tend to pick it up quite quickly.

Ask a friend to hold your dog at one end of a path or alley, and lay his toys and treats in two parallel lines. Stand at the other end of the path or alley and call him to you so that he walks up the middle. Each time he does it without succumbing to the temptation of picking up a toy or a treat, reward him for it.

3. Tug-of-war
Some people avoid playing tug because they worry it will encourage aggression in their dog, but the RSPCA says there shouldn’t be a problem as long your dog obeys when you ask.

Encourage him to grab the toy (something soft and comfortable to hold is best) by saying ‘get it’ or ‘grab it’. When he has a good hold, keep him interested by shaking the toy, from side to side, up and down, and backwards and forwards.

During the game stop tugging by saying ‘leave’ (just once), move your hands into your body, keep them still and don’t speak. Your dog may continue tugging but will eventually release the grip. Allowing him to ‘win’ sometimes will help build his confidence.

Tug provides an outlet for your dog’s natural canine urge to grab and pull on things with his mouth.

4. Brain training
Keep boredom at bay with an interactive brain game, designed to occupy and stimulate. A couple you might want to try are Dogit Mind Games Interactive Dog Toy (RRP £15.49) and the Aikiou Interactive Dog Bowl (RRP £19.99), both available from petplanet.co.uk.

5. Clean up your toys!
Teaching him to put his toys away is a great game and helps you, too. All you need is a basket and a few of your dog’s toys.

Scatter the toys on the floor near the basket. You’ll probably have to help him at first, but get your dog to pick up one toy at a time and give them to you by holding out your hand. Each time he gives you a toy, reward him with a treat. Then show your dog how you put each item he gives you in the basket.

Show him the basket and point to it every time he picks up a toy in his mouth. Eventually he will drop each toy into the basket – but remember to treat him every time he does this successfully. This game is good for obedience training.

HELP US TO GIVE BATTERSEA DOGS AND CATS A TREAT

Petplan has launched a new campaign to provide food and play treats for the animals at Battersea Dogs and Cats Home. Please help us by visiting our Facebook page, pressing ‘Like’ and choosing whether to donate a treat to a cat or dog.

Do you have any great games to share? We’d love to hear about them. Let us know by commenting in the box below.

October 18, 2012 Share via Email Share via Email Share on LinkedIn Share via whatsapp Share on Twitter Share on Facebook Share this article:
Back to top
louise
i have a fancy dress costume for my little shih tzu toby its a super man one nothing wrong with dressing them up every now and then
Posted on: October 24 2012
Claire
Re dressing up dogs.... I believe this is based more on the owners needs/ wants rather than what the dog requires. I like to think that I am respectful of my dog, first as a beautiful animal, secondly recognising its breed and the fundamentals of how the breed interacts and the function of the breed and dog. I have no desire to disrespect my handsome animal/ dog by dressing it up that only causes the dog to be ridiculed. The only exception is the use of dog coats for some breeds and older dogs, where they need extra protection from the weather.
Posted on: October 28 2012
free games like pokemon
If you wish for to take a good deal from this article then you have to apply such methods to your won website.Feel free to visit my blog post: free games like pokemon
Posted on: June 02 2013
7 zip free download
Unquestionably consider that which you said.Your favourite justification seemed to be on the net the easiest thing to be mindful of. I say to you, I definitely get irked while folks think about concerns that they plainly do not understand about.You managed to hit the nail upon the highest and outlined out the entire thing without having side effect , other people could take a signal.Will probably be back to get more. Thank youFeel free to visit my blog post; 7 zip free download
Posted on: July 21 2014
search engine spiders
hey there and thank you for your information – I have certainly picked up anything new from right here. I did however expertise several technical points using this site, since I experienced to reload the web site lots of times previous to I could get it to load properly.I had been wondering if your web hosting is OK?Not that I'm complaining, but slow loading instances times will sometimes affect your placement in google and could damage your high-quality score if ads and marketing with Adwords.Anyway I'm adding this RSS to my e-mail and could look out for much more of your respective fascinating content. Make sure you update this again soon.my weblog ... search engine spiders
Posted on: September 17 2014
dog backpacking
Normally I don't learn article on blogs, however I would like to say that this write-up very pressured me to check out and do so! Your writing taste has been surprised me. Thank you, very nice post.
Posted on: December 09 2014
christine Henderson
Ihave a seven month old Jack Russell, she gets very excited if someone comes into our house, and also when we take her out to someones house, how can we calm her down, she is a very friendly dog, loves attention and loves to lick everyone, which I don't really like.
Posted on: September 20 2015
Mr DCBowerman
I don't know where you got the name dree from. BUT Are dogs name is BREE. Thank you
Posted on: November 19 2015
gumtree.Com
It might appear to be a whole lot, but when you'll not use the merchandise, you're truly losing funds.
Posted on: March 19 2016
Polly Mac
I bought my dog this: http://petshop.co.uk/Soundbite-Treat-BallIt's great for when I can't play with him and keeps him occupied for hours. He loves when he gets a treat too, win win! Recommend!
Posted on: September 23 2016
pet shop itajuba
I love you dogs
Posted on: October 16 2016
D McDonald
Dolly has a silver in the KC good citizens award will this make her insurance any cheaper
Posted on: December 13 2016