Neutering: behind the scenes 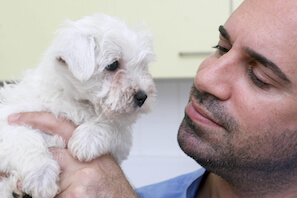 Having our pets neutered is highly recommended by most vets - but what actually happens to our four-legged friends when they have the operation? Vet Marc Abraham explains all

Neutering is an important part of responsible pet ownership: it not only stops your pet having unwanted litters, but also prevents potential behavioural, medical and surgical problems such as breast cancer. It's also the perfect opportunity to get your pet microchipped.

The term 'neutering' describes the sterilisation of both sexes: in males, it involves the removal of both testicles (known as castration); in females, the removal of both ovaries and uterus (or spaying). While this may sound drastic, it's a routine procedure.

On arrival at the vet, the patient is weighed, its heart and lungs are checked, its testicles (if male) are counted, and its temperature is taken. The vet will also make sure that the patient has been starved from the night before - this decreases the likelihood of vomiting and inhaling food into the lungs while under anaesthetic.

After you leave us your contact details and sign the consent form, your pet is admitted and given a pre-med - a course of drugs that means less general anaesthetic agent is needed, giving a much smoother induction and recovery, as well as making animals much easier to restrain for any intravenous injections. Blood tests may be recommended for older pets.

A vet performs a neutering operation on a male cat (castration)

Neutering procedures are usually first on the surgery - to do list, as they are considered 'clean', as opposed to 'dirty' surgery such as dental and abscess operations, which usually wait until the end of the day to reduce the risk of cross contamination.

Anaesthetised patients are intubated - a long rubber pipe is inserted between their vocal cords, down the windpipe and straight into the lungs to pump in gas to maintain sufficient anaesthetic depth. The surgical site is then clipped and disinfected.

As with most operations, techniques vary - but male cats (toms) are usually castrated via simple incisions that rarely require stitches, whereas female cats (queens) are often spayed via a keyhole incision on the left flank that requires a few stitches to close. Rabbits can also be neutered, allowing them to live happily together without fighting or breeding.

It will come as no surprise that canine 'bits' are bigger so usually require more intricate needlework beneath the surface. Bitch spays are recommended three months after last season or at six months of age, depending on your individual vet.

After a full anaesthetic recovery, your pet can be sent home to rest with a light diet and any appropriate treatments - for example, a buster collar - to prevent them licking or nibbling their wounds.

Share via Email Share via Email Share on LinkedIn Share via whatsapp Share on Twitter Share on Facebook Share this article:
Back to top
miss lisa yates
just to note on the good info on neutering, with rabbits you do not starve them prior to surgery, as you would with cats/dogs, a rabbits gi tract needs to continue moving to prevent gi statis which can be fatal if they stop eating
Posted on: April 27 2012
Laura
Thanks for that article - it's very timely as my puppy is going in this week to be neutering and have his belly button hernia fixed. Any tips on how to make sure he leaves his stitches alone? Particularly for his hernia as it's easier to get to...Also - I've received conflicting advice about what age to have my puppy neutered, he is a Rhodesian Ridgeback - so a large breed - and nobody seems to have been able to give me a definitive answer. He will be seven months next week and I've been assured this is fine, but any additional information would be most appreciated.Thanks
Posted on: April 29 2012
Francesca - The Petplan Team
Hi Laura,We asked Petplan Vet of the Year Brian Faulkner and he came back with the following advice - The quick answer is that there is no absolute definitive â€˜rightâ€™ age. Some vets recommend that large breeds should be allowed to mature before they are castrated to avoid possible bone growth issues but the evidence for this isnâ€™t conclusive. Other vets take the view that all dogs over 6 months old can be castrated. My personal view is that if a large breed isnâ€™t displaying any anti-social habits (excessive marking, dog-to-dog aggression), I tend to leave them until about a year but if they have any anti-social behaviours Iâ€™ll do them anytime from 6 months and Iâ€™ve never had a problem by doing this. Thanks,Francesca - The Petplan Team
Posted on: May 02 2012
Laura
Thanks Francesca - good to know there isn't a hard and fast rule. In the end he had the op this week as he had a hernia to fix as well and is now recovering well at home.Great to have this extra resource to call upon as well as my local vets advice.Thanks again,Laura
Posted on: May 04 2012
caroline
Hi male lab is 8 months old,he isn't aggressive at all but has started trying to get a bit friendly with adults. I have small children in the house. Would having him neutered sooner than a year help to prevent this?
Posted on: August 27 2015
Petplan
Hi Caroline,It might. Certainly it isn't an unreasonable thing to do in the first instance as there are general health benefits of being castrated and hopefully it will also resolve this early behavioural issue as well.Let us know how you get on.Thanks, Jade - The Petplan Team
Posted on: August 27 2015
Sarah
Hi we have a 10 month old boxer dog.We were waiting to see if his balls would drop but it's not looking like there going to.They have not dropped from his stomach, so needs op to remove them, as this is not just a straight forward castration, can we claim this on our petplan insurance.
Posted on: February 21 2016
Petplan
Hi Sarah, If you could please email your details to social@petplan.co.uk we can have someone look into this for you. Many thanks, Jade - the Petplan Team
Posted on: February 24 2016