We asked three owners to put some of the best items for your cat’s mental and physical health (as recommended by the experts) to the test. Here’s how they stacked up… 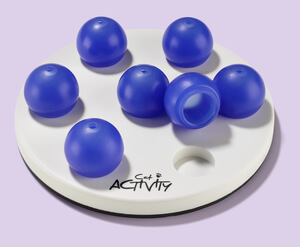 What our expert said: ‘This strategy game is great for mental stimulation, and is also a fun way for you and your cat to interact and bond,’ says Petplan veterinary expert Brian Faulkner. ‘As your pet will need to figure out how to lift each hollow cup to get the treat you’ve hidden beneath, it’ll automatically be more rewarding for her. The game also comes with a booklet with hints and tips for training. You’ll be surprised at how quickly your cat will come up with new strategies and how much she’ll enjoy it.’

What our reviewer said: ‘My 14-year-old adopted cat, Nermal, used to love toys that he could chase, as well as fishing-rod toys with fluffy things on the end that he could pounce on,’ says owner Andrew Bell. ‘But, as he’s gotten older I’ve found he’s less interested in toys and prefers games that we play together (or simply lying around!). I had hoped that the Trixie Solitaire would get him to start playing more and, while he did enjoy finding treats when I engaged in it with him, he lost interest when he was left to it himself. Overall, it’s a great, stimulating game but it’s one that I think most owners will need to invest a little time in, too.’ 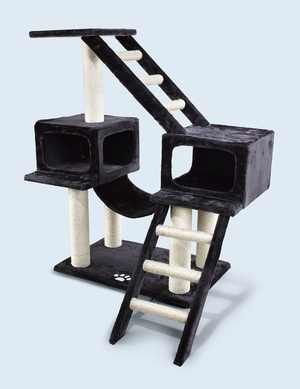 What our expert said: ‘I love this cat tree from Pets at Home. It’s perfect for older cats who may have signs of arthritis, as its ladders mean that they can easily climb without having to jump,’ says Rosie Bescoby, a clinical animal behaviourist. ‘Cats like to spend time up high, where they’re able to safely survey their territory, and they also love to hide. This activity centre gives them loads of options for both. It’s also very sturdy, which is ideal for its scratching posts, as cats like to scratch against something that doesn’t wobble.’

What our reviewer said: ‘Our eight-year-old cats, Kimi and Misla, both like their privacy. So we were sure that this activity centre’s hiding spots would appeal to them,’ says owner Toby Mathews. ‘It came in separate pieces and was very easy to set up but, strangely enough, neither cat took to hiding in it. It was some time before they ventured near it at all, which could be because of its new smell, and when they did it was mostly to use the scratching posts. We’ve tried to lure them onto its different levels with treats and toys, but this has only resulted in short stints of play. All in all, it’s a great quality product that would work brilliantly for cats who aren’t so stuck in their ways!’ 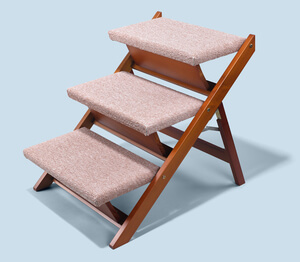 What our expert said: ‘As cats age, they may become less agile and some of their favourite resting places can become difficult to reach. If your cat is no longer able to or is having difficulty getting to her favourite spot this may cause her some anxiety. Luckily, there’s a great range of pet steps and ramps available that can help. I particularly like the Barkshire Pet Steps & Ramp, as it can work as both. It can be easily set up as steps, or can be folded into a ramp if necessary. As a bonus, it can also be folded flat to make packing it away easier.

What our reviewer said: ‘13-year-old Eric was a rescue cat and, because he was abandoned, he’s always been a bit jumpy and likes to go higher up where he feels safe,’ owner Michael Wood says. ‘Recently, he also seems to shy away from strokes and cuddles, and our vet thinks this could be due to pain caused by arthritis. The steps were really easy to use, and I put them in front of his usual spot on a windowsill so that he’d no longer have to jump up. At first, he didn’t want to use them at all, but after a fair amount of coaxing, and using lots of treats, he’s now gotten the hang of it. I’d definitely recommend that other owners whose cats are also getting less agile give it a go. And keep trying; it can work if you help your cat to keep at it!’