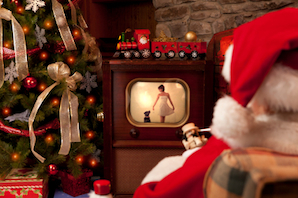 Animal-lovers can look forward to many great programmes on the box this festive season. Here are 10 of the best.

Rolf’s Animal Christmas
Christmas Eve, 6pm, Channel 5
This Yuletide special from everyone’s favourite cartoonist-turned-pet-lover features a host of heart-warming and memorable stories from the popular series Rolf’s Animal Clinic. The programme reveals how pets get on once they return home to their owners after treatment at the University of Liverpool's School of Veterinary Science. You might want to keep the tissues close by, as there could be some tearful reunions…

World’s Biggest Pets
Christmas Eve, 7pm, Channel 5
Meet a 7ft-tall wolfhound and a rabbit as heavy as a five-year-old child in this festive feast of larger-than-life animals. There are also appearances from snakes, lizards and spiders – and big ones at that. As you watch, give your own pet a cuddle and be thankful that shelling out for a standard-size cat flap is a small price to pay for companionship!

The Snowman and the Snowdog
Christmas Eve, 8pm, Channel 4
Channel 4 has screened the animated adaptation of Raymond Briggs’ classic children’s story The Snowman since 1982, the year of the channel’s launch. To celebrate 30 years on air, the station commissioned this charming sequel. With two mismatched socks for ears, the Snowman’s cute Beagle-style companion received Briggs’ own blessing and is set to introduce his style of storytelling to a whole new generation.

Paul O’Grady: For the Love of Dogs
Christmas Day, 6pm, ITV1
In this hugely popular series, dog-lover Paul has shown that he’s never slow to muck in to help the canine residents at Battersea Dogs & Cats Home. Here, he prepares Christmas dinner for some of the rescue centre’s adorable pooches. Now that we're accustomed to Paul's doggy side, we'd love to see his alter ego Lily Savage present an episode so that we can enjoy his catty side too!

That Dog Can Dance!
Boxing Day, 8pm, ITV1
With Britain's Got Talent attracting so many performing dogs, it was only a matter of time before Simon Cowell's production company put together an entirely canine talent show. The judging panel features Bill Bailey, Sharon Osbourne and BGT winners Ashleigh Butler and Pudsey, who will also be performing. Other precocious pooches on stage include a Fred-and-Ginger-esque pair of Jack Russells. Will they do the Fang-dango, or perhaps the King Charles-ton, we wonder…

Bolt
Thurs 27 Dec, 2pm, BBC1
This family-friendly animated tale is all about fearless pooch Bolt (voiced by John Travolta), who has spent so long playing a hero dog on a TV series that he thinks he really does have super powers. When he is accidentally separated from kind-hearted girl Penny (Miley ‘Hannah Montana’ Cyrus) in the real world, the starry-eyed mutt must come to terms with the fact that he is just an average dog after all (albeit a very cute one!).

Super Famous Animals
Sun 30 Dec, 7pm, ITV1
Here’s a tribute to the animal superstars that have made their names on the big screen, on TV and online. Ashleigh and Pudsey from Britain's Got Talent rack up another Christmas telly appearance here, but they have to share the billing with Hollywood types including Uggie, the Jack Russell from hit film The Artist (who has even ‘written’ his own autobi-dog-raphy) and internet sensation Nora, the piano-playing cat. Also look out for Twiggy, the water-skiing squirrel!

David Attenborough’s Galapagos
New Year’s Day, 7pm, Sky1 & Sky 3D
Following the success of Kingdom of Plants, this is the second 3D work from Sky to feature Sir David. In this first of three episodes, the veteran naturalist visits the Galapagos Islands to show us the first-ever footage of the pink iguana and, sadly, the last-ever footage of Lonesome George, the giant tortoise who passed away this year after more than 100 years on Pinta Island. As far as we know, there are no controversial polar-bear scenes in Sir David's latest outing…

Africa
Wed 2 Jan, 9pm, BBC1
It's that man again: yes, we’re treated to a double-whammy of David Attenborough for Christmas. This programme is a little dry, but only because this first of six episodes about African wildlife focuses on the Kalahari desert. Despite the apparently inhospitable conditions, various entertaining animal fixtures play out here, including meerkats-versus-bird and giraffe-versus-giraffe. There's some grisly stuff involving the eating habits of giant crickets too – but at least we’re treated to a little cuteness in the form of lovable baby ostriches. Awww!

Wild Britain With Ray Mears
Fri 4 Jan, 8pm, ITV1 (not STV)
Woodsman and forest survivalist Ray Mears once said: ‘Knowledge is the key to survival, and the best thing about that is it doesn't weigh anything.’ And there’s plenty for him (and us) to learn in this third series of Wild Britain. Episode one takes him to the Isle of Mull in the Inner Hebrides, where he comes face-to-face with the world’s second-biggest fish and watches an otter hunting along the coast.