Are you becoming more and more like your pet? 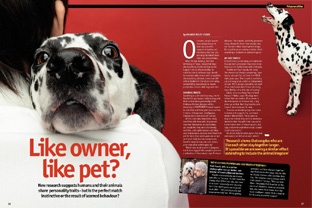 Research suggests humans and their animals share personality traits - but is the perfect match instinctive or the result of learned behaviour? From the PetPeople magazine archive

Of course, we pet owners have always known it. And now scientific research is bearing out the theory that our cats and dogs do indeed have their own personalities. When Dr Sam Gosling, from the University of Texas, researched dogs' characteristics, he found they varied hugely in terms of personality. So much so that he believes dogs should be matched with owners with compatible characteristics. Indeed, more than 150 animal shelters in the US are now using compatibility assessments to match prospective owners with dogs and cats.

Sharing traits
According to a UK online survey, one in five British pet owners believes they share the same personality traits as their animal. Professor Richard Wiseman of the University of Hertfordshire asked owners to rate their and their pets' personalities in terms of happiness, intelligence, independence and sense of humour.

Of the 2,500 who responded, many identified with their pets. Dog owners described themselves as dependable, cat people felt they were emotionally sensitive, and reptile-keepers said they were independent. Anyone who'd had their pet for more than seven years was 40 per cent more likely to draw comparisons. Could it really be that pets and owners grow more alike as time goes by?

'This is very much a work in progress, but it does suggest that people's pets are a reflection of themselves,' says Professor Wiseman. 'In humans, similarity promotes liking. Research shows that couples who are like each other stay together longer. It's possible we are seeing a similar effect extending to include the animal kingdom.'

We are family
Animal lovers Laurie Gabay and Sylvia Van Atta are both convinced they share more than just the family home with their pets.

'Cookie and I are exactly the same. She mirrors my lifestyle completely,' says Laurie, who got her cat from the RSPCA eight years ago. 'She is used to me being out and away a lot, and is as independent as I am. We're always pleased to see each other, but Cookie doesn't ever sit on my knee. Neither of us like lots of fussing.'

Sylvia, who runs Many Tears Animal Rescue in Wales, says: 'The dogs here reflect their ex-owners. If an owner is short-tempered or stressed out, a dog picks up on that. But they tend to calm down in here because I'm calm.'

'I rescue ex-breeding dogs from some breeders and puppy farms, and some come in like zombies. Yet as soon as they're re-homed they start to develop a character that fits with their new owner. I don't know who's influencing who, but dogs and owners somehow mould to each other's characters.'

Do animal behaviourists agree that pets and owners can influence each other's personalities? 'I'm not sure that a different species can absorb human characteristics,' says cat behaviourist Vicky Halls. 'We tend to anthropomorphise our pets' behaviour. For instance, owners often say their cat shares their sense of humour when they're interpreting things from an entirely human viewpoint.

'Superficially, it looks as if my Devon Rex, Mangus, shares my love of being in the limelight. But the truth is that she's blossomed since becoming a single cat four years ago. And, because I work in the media, she's put in situations where she's the centre of attention.

'Similarly, I've known cats and owners to be on the same medication for anxiety. What happens is that a susceptible cat is looking to its owner for security and then gets anxious if the owner's state of mind is causing them to give erratic care.'

Vicky believes we subconsciously gravitate towards pets we feel we can relate to. Someone with a history of depression might have a strong desire to rescue a sad homeless animal, while high fliers are often attracted to particularly intelligent breeds. 'Humans feel there's a tremendous bond of understanding between cat and owner, but the cat learns how to press buttons to get what it needs. So my three-legged cat, Hoppy, wasn't talkative because I was. He was using a special meow to get me to go and scratch the side of his head he couldn't reach!'

Humanising our pets
Dog expert Colin Tennant says: 'The best way to describe the human-dog relationship is in terms of cause and effect. For instance, some small breeds have a predisposition to being nervous. So if a dog appears needy, a responsive owner might reinforce it by becoming overindulgent. Now the owner's behaviour is being shaped by the dog and the dog has learnt that it gets a reward - attention - for a certain type of behaviour.'

Colin shares Vicky's view that we often humanise our pets and misinterpret their actions. 'The main reason humans like dogs is that they have traits we like that give us the impression of love and loyalty. They're always happy to see us. I have seen a dog chew through a brick wall to run upstairs and be with its owner. But it's not love as humans know it; it's pack instinct - a need to be bonded.'

Vicky adds: 'Being bonded with you and showing great preference for you is as close to 'love' as any cat can get.'
So are we barking up the wrong tree looking for signs that our pets have personalities and emotions exactly like us? Clearly our pets have their own characteristics, are capable of strong emotions and display behaviours that delight us. And, although our dog or cat may not be doing something for the reasons we think, the lives of Britain's dog and cat owners are infinitely richer for being shared with them.

By Amanda Riley-Jones
Originally published in issue 2 of PetPeople, the Petplan customer magazine

Share via Email Share via Email Share on LinkedIn Share via whatsapp Share on Twitter Share on Facebook Share this article:
Back to top
Shelley Goodman
I am not sure about beginning to look alike but following some blood tests last year Bonnie, my Jack Russell cross, was diagnosed with an underactive thyroid. There was also an indication that she may be diabetic. I myself suffer with both of these illnesses. For many years she has had a fatty lump around one of her nipples, my reaction to the vets diagnoses was that you'd better check the lump out as I have had breast cancer too.
Posted on: June 24 2011
Elizabeth Millar
Not sure about me becoming like her, but my cat is becoming like me. We got her from a rescue shelter. She was there because her elderly owner had died. Maia was so like a little old lady. She was a fan of settling down for lots of sleep alone and hated being disturbed. Now shes more like me, lots of energy, definate cheeky streak, quite demanding for attention, loves play. We've only had her 4 months and we're like 2 peas in a pod. My husband often jokes that we're ganging up and plotting against him.
Posted on: June 24 2011
Elizabeth Millar
Best wishes and best of health for you and Bonnie
Posted on: June 24 2011
Brian Murray
I'm sure the more honest amongst us would wish that we were more like our dogs. Or, to be even more accurate, that more people were like dogs. I've had dogs all my life, with hugely varying personalities, but traits which they also shared: loyalty, humour, devotion and a real interest in life as well as being extremely happy and good tempered. I'm still working on the last two....
Posted on: June 25 2011
Val Duncan
I have had the pleasure of dogs around for 60 years mainly German Shepherds and each dog was very different yet over time there was the same closeness with each one. It really does seem like cause and effect because experience teaches us to respond to each animal a little differently according to their needs.A nervous dog needs confidence so we jolly them along to show there is no danger and step in to avoid unwanted intrusion... A bolshi dog needs a bit more firmness to show we are calling the shots but much praise when the dog responds in a good way. There are many staits in between that need us to think on our feet to show the right response and over time there is a mutual agreement and respect between dog and human.It is called 'training' but it simply means human and animal learning the rules of living together... the payoff is wonderful for the human and the dog has a real companion tailored to its own needs... what a wonderful world it is to have animals around.
Posted on: June 25 2011
carol abdullah
My little JR is just like me! wizzy and energetic when she is out on a walk..but indoors she is so relaxed! goes to bed at 9.30pm and cant get up in the morning..she is a great gal!!!! just like me (:
Posted on: July 27 2012