Could you win our Guess the Breeds game? 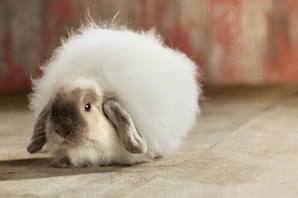 Against a ticking clock, how many cat, dog or rabbit breeds can you recognise? Play Petplan’s Guess the Breeds game to test your skills.

If you're accurate – and the quickest – you could win £500 of Pets at Home vouchers.

All the animals in our Guess the Breeds game also featured in Petplan’s TV ad campaign. Some of these beautiful pets are very used to taking a starring role, having appeared in different ad campaigns over the years, but for others, this was their screen debut!

Meet three of our stars:

Titch (pictured) loves nothing more than to be brushed by his owner – and Cashmere Lops need daily grooming  – but it wasn't until he was three months old that Titch's amazingly fluffy coat appeared. In fact he was the only one of his litter to develop such a long coat. The Petplan advert was Titch's first appearance on a TV film set – but he very much enjoyed being pampered!

This breed of rabbit is unusual. It was not developed by crossbreeding but due to a genetic mutation that causes the characteristic fluffy coats.

Rescued from a rabbit hutch when he was only a year old, Bob's bad start in life hasn't held him back. As well as our Petplan advert (and Guess the Breed game) this handsome cat has appeared in ads for Ikea, the Post Office and Peugeot, and starred alongside Stephen Fry in the TV show Kingdom.

The name 'Ragdoll' comes from the breed's tendency to completely relax when held correctly, and though not every Ragdoll displays this trait, the cats are known for being affectionate, sociable and easy to handle.

Ragdolls are larger than many other breeds and mature slowly, reaching their full size at around three to four years. This means that although a Ragdoll kitten may look large in its first year, it will continue to grow until it is three- or four-years-old.

Because she comes from working rather than show stock, Jessie the black Labrador in our TV advert and Breed Game is smaller and leaner than your average Lab. She is usually found running around the hills and woods near her home in Worcestershire with her best friend Peanut the Shetland pony.

Also known as Labrador Retrievers, or 'Labs' for short, this breed is thought to have descended from the Newfoundland coast. Fishermen used the dogs to retrieve their catch – Labradors are good swimmers with weatherproof coats that help protect them from cold weather and icy waters.

Meaning 'worker' in Spanish, the name Labrador reflects the breed's energetic nature and need for regular exercise. Labs play hard too and are devoted, obedient dogs that get along well with children and other pets.

Share via Email Share via Email Share on LinkedIn Share via whatsapp Share on Twitter Share on Facebook Share this article:
Back to top
eplace.com
Write more, thats all I have to say. Literally, it seems as though you relied on the video to make your point. You definitely know what youre talking about, why throw away your intelligence on just posting videos to your site when you could be giving us something enlightening to read?
Posted on: October 26 2013