Debate: How should we tackle the problem of dog fouling? 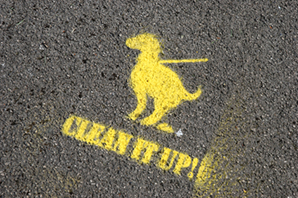 Although most owners are responsible and clean up after their dogs, a small minority are still failing to do so. So what's the best way of dealing with foulers? Sophie Mackenzie looks at various tactics that have been used, from shocking and shaming owners, to rewarding those who clean up.

It was on a normal early morning walk when my eye was caught by what I first thought was graffiti on the road in front of me. Bright yellow paint, sprayed through a stencil... I tutted, then took a closer look and realised that the sprayed motif was a picture of a dog, in the squatting position familiar to any owner, and underneath it, in bold capitals, the words 'BAG IT. BIN IT'.

This campaign, started by disgruntled local residents, is just one measure taken to tackle a particularly intractable problem: the 1000 tons of faeces produced each day by Britain's eight million dogs. For responsible owners, the sight of a pile of poo on the pavement is as offensive as it is to non-dog owners. But some people see picking up after their dog as someone else's problem.

That someone is generally the local authority, and a various schemes have been deployed to tackle the dog mess menace. Some rely on the presence of visible dog wardens to deter offenders - or use undercover wardens to issue on-the-spot fines. Others spray the mess with luminous paint or plant flags in it. One council in Wales went for shock factor, producing a printed poster of a toddler, face smeared with chocolate, to make the point that small children will put anything in their mouths.

And the search for a solution isn't confined to the UK. Taipei City offered lottery tickets to everyone who handed in a bag of dog poo. Paris had its Motocrottes - scooters with vacuum attachments for poo disposal. One Spanish town identified the guilty owners, bagged up the mess and posted it back to them. It's even been suggested that the solution could be a DNA database of dogs, used to track down and fine the owners.

But what can individual dog lovers do to help? One friend tells how, after a five-minute rant at a man who'd failed to pick up after his dog, he humbly apologised and asked to use one of her poo bags. Another, exasperated by a repeat offender whose dog used his driveway as a toilet, put up signs along the street that read 'I KNOW WHO YOU ARE'. The fouling stopped. And, of course, simply picking up dog mess when you see it will help keep our streets and green spaces safe and clean.

Do you have a success story about victory over dog foulers? Do you think shocking or shaming is the way to go? And are you ever guilty of not cleaning up after your dog? Tell us in the comments.

Share via Email Share via Email Share on LinkedIn Share via whatsapp Share on Twitter Share on Facebook Share this article:
Back to top
Kate Graham
This is a topic that I feel very strongly about. Having 2 Labradors that will eat anything and subsequently produce piles of poo the size of a small dinosaurs. My family and I still carry around plenty of nappy sacks to be able to clean up after every stinky pile as why should anyone else do it?? It is my responsibility. You wouldn't expect someone else to clear up after your children or yourself..... you have that same responsibility as a dog owner. Name and shame these people.... there are no excuses!
Posted on: September 12 2013
Alison Burr
As a previous dog owner I have been picked up my share of dog poo. When new to the dog owning world though I had no idea you had to follow your pooch around and wrap up whatever it had produced (this was on a common, not on someone's front pathway), it wasn't until our local authority put up polite signs and made specially designed bins widely available did I start to comply.A little education would go a long way - signs in the area, combined with leaflets that have a handful of free plastic bags with them would encourage more people to pick up their dogs mess. Shaming and shocking people should be a solution a lot further down the line.
Posted on: September 12 2013
Dog Owner
There are fines for these kind of things, but are they ever followed up? No. Our government is too afraid. It's political correctness gone mad. I think mandatory community service picking up other peoples' dog mess, or even a short stint in prison would show these people that we mean business. Dog business. Stop giving dog owners a bad name.
Posted on: September 12 2013
Denise Clarke
We have a 17week old puppy , every hand bag , coat pocket has kitchen roll and bags to pick up her poos , we wouldn't think of just leaving it for someone else to clear up ! Even my husband wears a bum bag when he takes her out with bags etc in ! Causes a bit of a laugh as you can imagine ! At the end of the day it's our responsibility to clean up . It has been hard at times as I use a crutch due to a knee injury , trying to clean up , ward off kisses from an excited puppy is a bit of a balancing act but not impossible . I think that people should be fined if caught, when I was a child if you owned a dog you had to have a licence , it made you realise the responsibility you had taken on which I think is lacking in some dog owners . The law needs to be stronger and punish those that break them .
Posted on: May 20 2014
Carol Townsley
I don't own a coat or a bag that doesn't have poo bags in it there's nothing more annoying than not being able to take my dogs for a walk having to dodge round mounds of doggie poo can't understand how people can walk away and leave it :(
Posted on: June 10 2014