Do dogs enjoy listening to music? 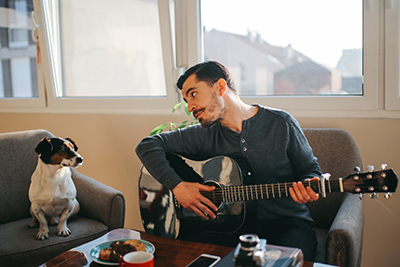 Hound Dog, Diamond Dogs, Snoop Dogg, who let the dogs out? It seems that dogs are everywhere in our pop culture consciousness and music is no different. But what about the dogs themselves? Do they have a sense of sound as keen as their sense of smell? Do dogs enjoy listening to music?

We’ve all seen dogs howl along to some of our favourite tunes, taking it as implied that they’re enjoying the music and attempting to sing along. However, dogs are much more perceptive than we give them credit for, so what do they get out of these inter-species music sessions?

Why do dogs howl to music?

Wolves and wild dogs are known for their howling, so much so that they’re practically synonymous - think of the amount of times you’ve seen a wolf howling in any form of media. Domestic dogs on the other hand tend to howl less, but that doesn’t mean these instincts have been lost through evolution. In fact, howling is actually common in domestic dogs and it typically occurs when they’re introduced to music.

The common misconception is that a canine’s howl is an attempt to create music itself, when in reality it’s a form of communication. Howling can represent loneliness, as the stereotype goes, but it also serves other important social purposes such as assembling the pack or reinforcing pack unity.

In this context it isn’t so much that the dogs are creating music but they are entering into a social activity. It’s also worth noting that each canine will have a different musical tone, no two animals will share the same note. This is also why when a dog joins in with people singing, it’s instantly recognisable because the dog gets more enjoyment from being on a different note to everyone else. Whilst you probably won’t be able to start a band with your dog you can at least take pleasure in the fact that they’re enjoying themselves.

Can dogs actually hear the music?

Whether or not dogs can actually hear the music is not fully understood. They can certainly hear the noises but due to their hearing range they may not be as perceptive to notes on a scale. As dogs can perceive a much wider range of frequencies than people, the subtle differences between 440hz and 490hz (the middle keys on a keyboard) would not be as obvious to them. People on the other hand, have a much narrower frequency range and so these subtle differences are much more obvious to us, allowing us to hear the melody being played.

What genre do dogs prefer?

Now we know that dogs enjoy getting involved with music as a form of socialising, but we know that they may not fully understand what they’re hearing, so what music should we play to get them involved?

Research by psychologist, Deborah Wells, of Queens University, Belfast, examined dogs reacting to various genres to discover what sort of music canines prefer. During this research, the dogs were introduced to heavy metal, modern pop, and classical music, with their reactions recorded.

Pop music didn’t seem to elicit any kind of response, the heavy metal music fostered a negative response including barking and general agitation, whereas classical music seemed to help calm the animals, reducing the level of stress they were experiencing.

This research also seems to be backed up by the fact that of the many playlists aimed towards dogs on Spotify, a large number of them are predominantly made up of soothing classical pieces.

Classical pieces have also been found to help reduce the separation anxiety felt by dogs when they are left unattended, helping to reduce nervous behaviours. Try leaving the speakers playing next time you leave and see if it has a positive effect.

If you’re looking to introduce your dogs to music they’ll enjoy, classical seems to be the way to go. Try to avoid heavier sounding songs and of course, ensure that your pet’s environment is as comfortable as possible. Less Mastodon, more Mozart!

Are there any songs that get your dog singing like Sinatra? Let us know in the comments below!