A guide to the Dwarf Lop, Netherland Dwarf, Sussex and other popular rabbit breeds 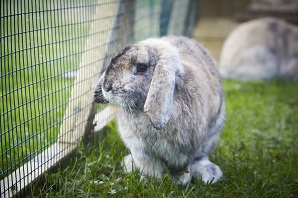 According to the British Rabbit Council there are more than 60 recognised breeds of rabbit in the UK as of August 2014.

Each has its own typical personality, characteristics and requirements. For example, long haired breeds are for the dedicated as you will need to spend time grooming them.

Petplan takes a look at five of the most popular breeds in the UK and what you need to know about owning one...

The Dwarf Lop is a smaller version of the large French Lop rabbit. These rabbits are of a small to medium size and come in a wide range of colours including butterfly (white blotches on coloured background), fawns, orange and black sable. They can be solid coloured too or have patches of white on the head, chest and legs.

They are laid back, very loving and outgoing with a cheery disposition but un-neutered males will molest shoes, feet and toys, and some females can be bad-tempered until they are spayed. Their expected life span is 5 to 8 years.

They make great house rabbits as can be easily trained and are fine with being picked up and cuddled. However, they are prone to dental problems such as front teeth malocclusion and eye conditions.

This breed is positively tiny (usually less than a kilogram) – and very cute looking! They have a compact body, short neck and a broad head with a rounded face.

They can be nervous and feisty, so may not be the best option for a household with young children. Building a bond with them can take a while, but with regular, careful handling they enjoy human companionship. Their life span is typically 7 to 10 years.

With teddy-bear features and a very lovable personality it’s easy to see why these are such a popular breed. They are friendly, out-going and not shy. Colours include gold (reddish gold with milk chocolate shading) and creams (pinky cream coloured with lilac shading).

They are medium to large sized bunnies – big enough to co-exist with other pets such as cats and dogs, and make excellent house rabbits as they love human interaction.

They are quite greedy, so care needs to be taken with their diet, and their thick coat requires a brush at least once a week. Their life span is typically 6 to 8 years.

The Himalayan rabbit is easily identifiable and well known for its distinct markings. They have red eyes, dark ears and socks with a dark tail and dark spot on their nose.

The Himalayan is a medium sized bunny who can live in or outdoors. They have short coats (requiring minimal grooming) and a cylindrical shape which allows them to squeeze into very tight spaces – something to bear in mind if a house rabbit!

Personality wise – they are calm, friendly and intelligent. They are very sociable, love people and can be very affectionate. They can typically live up to 10 years.

Rather than originating in New Zealand, the breed was developed in the US. They are distinctively big (typically 4.5 to 5.5kg) and slender with muscular faces and round cheeks. They have long ears that stand up straight. Their eyes vary from pale pink to ruby purple. They have fluffy, thick fur which is prone to moulting and requires weekly grooming.

Their large size coupled with their friendly and placid disposition means that they’re good pets for kids and love being handled.

They usually live between 5 to 8 years and can be kept indoors or outside.

What breed of rabbit do you have? Are you considering purchasing one of the above? Let Petplan know your experiences of these different breeds

Share via Email Share via Email Share on LinkedIn Share via whatsapp Share on Twitter Share on Facebook Share this article:
Back to top
plastic extruder
To understand the process that plastic extrusion companies use to manufacture their own products,you have to have some knowledge of chemistry and an understanding of the complex machines that are used in the manufacturing process. * Ram Extruder.The screw must also be designed to suit a specific type of die.
Posted on: June 05 2016
Frenchy
Good answer first one ,if you don’t have a credit card go to a bank that has one and ask to restablish your crirlt.Todeestabiesh if put on the app. means it will have a better chance to pass. Was this answer helpful?
Posted on: April 01 2017