Is your jealous pet ruining your relationship? 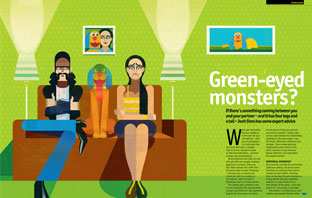 Pets often demand a lot of care and attention – and this can put a strain on other relationships in your life. We take a look at what to do when your pet becomes a green-eyed monster. From the PetPeople magazine archive

When your dog insists that you cuddle up to him and not your new partner, or your cat disappears in a huff every time your partner shows their face, it could be down to a case of pet jealousy.

The problem of jealous pets is now of such sensitivity that Battersea Dogs & Cats Home have offered their advice to pet owners about how to best to bring your pet and new partner together. 'Jealous pets can be a deal-breaker for relationships, especially in the early stages,' says Pat Moore, Battersea's behaviour unit manager. 'Over-compensating by mollycoddling them doesn't work either, because it only reinforces jealous behaviour and exacerbates the problem further.'

Emotional emergency
Most domestic animals are instinctively attention-seeking, and all too aware that they can influence their owner's behaviour to their benefit. Similarly, they can develop disruptive behaviours if they believe that your undivided attention is under threat from a new member of the group, your new partner or, notoriously, a new baby.

'The problem is not jealousy as such,' explains psychologist Janetta Smith. 'That's a human emotion we tend to ascribe to animals. It is a case of having taken away something that your pet is used to having – undivided attention – and your pet not being able to rationalise why that has happened. That leads to stress and sometimes boredom. The best solution to jealousy is to take the emphasis away from the owners and provide other sources of stimulation.'

Certainly the problem is now taken more seriously than in previous decades. Science continues to debate just how much thinking, feeling and planning various animals are capable of. But last year studies by Dr Paul Morris at the University of Portsmouth provided some evidence to suggest that the emotional range of dogs, at least, is broader than most people realise. His research suggests that they not only feel the so-called 'primary emotions' of anger, anxiety and surprise, but also more complex responses such as embarrassment, guilt and, yes, jealousy.

Social withdrawal and loss of appetite are common, if usually short-term, signs of jealousy. But the situation should not be ignored, because the consequences can be serious, with long-term adverse effects both on a couple's relationship and the animal's wellbeing.

Enter the rabbit
These problems of attention, or rather lack of it, can also arise when a new animal, rather than a new human partner, enters the domestic domain. According to David Ryan, chairman of the Association of Pet Behaviour Counsellors, our domestic pets rarely make any distinctions around whatever it is that prompts their 'resource protection behaviour', as the experts call it.

'Another animal, or even a new thing, can be as much a perceived threat as a new partner,' says David. 'I've known for a reaction to occur if the phone rings or the television goes on. One lady had a dog that would bite her feet whenever it heard the theme to Coronation Street. It's never vindictiveness and the problems tend to pass by themselves – as long as the owners don't mishandle the situation. Dogs and cats are pretty good at working out new relationships and circumstances over time. It's why we can live with them.'

Indeed, sometimes the problem is not with the animal at all. Relationship counsellors also advise asking the question: is your pet the problem or merely a pawn in your problematic human relationship? Arguments between new partners can centre on how much attention a pet gets, hygiene issues and how much money is spent on their upkeep. And small wonder when, for example, according to an American Animal Hospital Association survey, 72 per cent of pet owners greet their pet first when they return home, 43 per cent have given their pet a present – wrapped, that is – and 36 per cent allow their pet to sleep in their bed.

Strange bedfellows
'What does that say for the intimacy of your new relationship if your dog still sleeps in the middle of the bed?' asks Christine Northam, a relationship counsellor. 'In any new relationship that involves a dog or a cat, some kind of adjustment is usually required. But couples need to be quite self-aware to spot when the real issue is not their animal's behaviour but their own regard for it.'

Problems with a person's regard for their pet, rather than problems caused by the pet, are a product of the rapidly changing nature of our relationship with animals, argues Phillip Hodson, fellow of the British Association of Counselling and Psychotherapy. Less than a century ago, animals were more often put to work, or readily used to human ends. The relatively new idea of the domesticated pet for pleasure means that we now often treat pets with the attention more typically reserved for children.

For some, a relationship with an animal – which is often a blend of dependency, perceived reliability, constant companionship, warmth and comfort – can be easier to comprehend and live with than the complexities and uncertainties of human relationships. 'However, I often remind cat-loving clients that if their cat was 10 times bigger, it would eat them,' jokes Phillip.

'Domestic pets now are almost family members, and sometimes the love that should or might be shown to a human partner goes to the animal,' he adds. 'If, ultimately, someone puts a pet's needs over those of their human partner, the relationship risks being up the creek without a paddle.

'The question to ask in these instances is, if you could feel about a human the way you feel about your pet, would your life be improved? That is what people in these situations need to remember.'

By Josh Sims
Originally published in issue 4 of PetPeople, the Petplan customer magazine

June 06, 2011 Share via Email Share via Email Share on LinkedIn Share via whatsapp Share on Twitter Share on Facebook Share this article:
Back to top
daniel a
How could I tell if my girlfriend rabbit is jealous of me when we are cuddle up with each other while girlfriend has hold of rabbit
Posted on: March 02 2013
how to make beats with dubturbo
This is really interesting, You're a very skilled blogger. I've joined your rss feed and look forward to seeking more of your wonderful post.Also, I have shared your site in my social networks!
Posted on: May 12 2013
Brandy
This blog was... how do I say it? Relevant!! Finally I have found something which helped me. Thanks!Visit my page: Brandy
Posted on: May 26 2013
diet products
Hi there, after reading this amazing post i am as well glad to share my experience here with mates.
Posted on: July 26 2013
get taller naturally
This page really has all the information I wanted about this subject and didn't know who to ask.
Posted on: July 26 2013
Download Virtual DJ FULL VERSION
Hello would you mind letting me know which hosting company you're working with? I've loaded your blog in 3 completely different internet browsers and I must say this blog loads a lot faster then most.Can you suggest a good hosting provider at a fair price?Thanks a lot, I appreciate it!Have a look at my site ... Download Virtual DJ FULL VERSION
Posted on: March 07 2014
http://www.gamezebo.com
Does your blog have a contact page? I'm having a tough time locating it but, I'd like to shoot you an e-mail. I've got some creative ideas for your blog you might be interested in hearing.Either way, great site and I look forward to seeing it develop over time.
Posted on: April 11 2014
microsoft office 2013 free download
If you would like to improve your know-how simply keep visiting this web site and be updated with the hottest information posted here.Here is my webpage ... microsoft office 2013 free download
Posted on: May 24 2014