Meet the amazing Hounds for Heroes 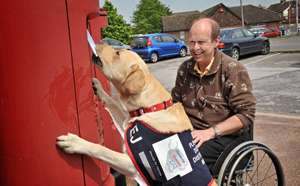 Charity Hounds for Heroes places assistance dogs with injured personnel from the armed forces and civilian emergency services. We meet founder Allen Parton to hear his story. From the PetPeople magazine archive.

The life of Allen Parton, a former chief petty officer in the Royal Navy, changed in an instant when he was serving in the 1991 Gulf War. He suffered head injuries so severe that he remembered nothing of his wife and children and little of his past life; he was left partially paralysed and dependent on a wheelchair. Traumatised, amnesiac and unable to perform the most mundane tasks, Allen twice attempted suicide before a chance encounter with Endal, a remarkable Labrador Retriever, who helped him to adjust and cope with life.

Now an advocate for assistance dogs, Allen set up the charity Hounds for Heroes in 2010 with a mission to train and provide support dogs for injured personnel from the armed forces and the civilian emergency services, enabling them to live more independent lives. 'We are not an extension of the Ministry of Defence nor the NHS,' he says. 'We are simply here to train willing, happy, fit and loving dogs to enhance quality of life. This charity is not about disability, it's about ability; solutions rather than problems.'

While the benefits are huge, the cost of assistance dogs that live with people round the clock can be a burden 'but Hounds for Heroes never denies anyone a dog on financial grounds,' says Allen. He explains that an assistance dog costs some '£20,000 during its working life' not only to cover the training, but also the upkeep costs to the client, such as food, equipment, travel and veterinary services.

With no public funding, the charity relies on the generosity of supporters (including Petplan, which has donated insurance for the first six Labrador puppies). We received '£44 from soldiers on the frontline in Helmand, who held a no-swear day,' says Allen. 'The Tower of London's beefeaters gave £300. One lady sent us her heating allowance.'

At the Hounds for Heroes training centre near Petersfield, Hampshire, these first recruits (or cadets) will complete their 14-month basic instruction early next year, then attend the 'boarding school' five days a week for a further eight months before being partnered with their permanent owners in October 2013. By then, they'll have an amazing skill set, from opening doors to using cash machines, honed to meet the needs of their prospective owner, 'whatever the disability' “ whether that client has no arms, no face, or post-traumatic stress disorder", Allen says. Meanwhile, six more puppies mustered for training in March.

The dogs - the militarily named Monty, Colonel, Flanders, Juno, Yomper and Red 4 (after Flight Lieutenant Jon Egging, who died when his Red Arrows jet crashed last year) are in an elite group. Only the best are accepted, says Allen: "We only take one from each litter to minimise the risk of any hidden genetic problems. Breeders can donate a dog and we're given first choice."

Trainers have long identified the suitability of Golden Retrievers, Labradors and German Shepherds as therapy dogs because of their intelligence and ability to interact with people without overreacting to them. 'The Goldie-Lab cross is perfect because you get the willingness of the Lab combined with the gentleness of the Goldie,' says Allen, adding that German Shepherds may be offered later, because 'some clients have said they want a more blokey dog'.

The backbone of the initiative is the 'puppy parents' scheme, says Allen. Volunteer families take a seven-week-old puppy, foster it for 14 months, socialise it and take it to weekly training sessions. The puppies become 'bombproof', meaning they will remain calm in almost any situation. Puppy parents must live within a 26-mile radius of Petersfield, preferably be drivers, and have the time to care for a pup - “ and the more that volunteer, the more dogs the charity can have.

Allen runs a tight ship: only 10p in the pound is spent actually running the charity, with furniture donated and paper re-used - 'every penny goes towards making a difference'.

And the difference that Endal made to Allen's life is legendary, chronicled in a bestselling book that Allen co-authored with his wife Sandra. Their remarkable story is being turned into a movie, 'with Colin Firth rumoured to play me and Kate Winslet Sandra', says Allen, laughing.

Endal, who died in 2009, picked up more awards than you could throw a stick at, including a Canine Lifetime Achievement Award. Like Endal, his successor, Endal Junior ('EJ'), can use cash machines, buy bus tickets, do the shopping and fetch help in an emergency. Star quality indeed.

In support of Hounds for Heroes, Petplan is providing free pet insurance for the first six dogs being trained by the charity. This includes full cover on our Covered for Life Classic policy for the first year of the dog's life.

Find out more and make a donation at houndsforheroes.com (registered charity no. 1134359).

For further updates on Hounds for Heroes, keep an eye on our Facebook page.