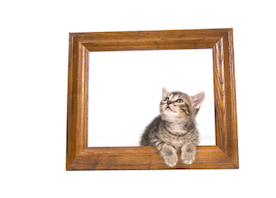 We recently told you about research that found owning a pet can bring health benefits and may even help you live longer. Now a Japanese study has discovered that having a picture of your pet on your desk may boost your performance at work.

The experiment, carried out at Hiroshima University, discovered that looking at pictures of cute animals may increase concentration by up to 10 per cent, thanks to a ‘cuteness-triggered positive emotion’ associated with taking motivation from anything that makes you feel good.

The study involved three groups of students: the first looked at pictures of puppies and kittens; the second viewed grown-up animals; and the third were shown images of tasty-looking foods. Each of the groups then completed tasks that tested their concentration.

The performance of the group looking at the young animals improved by an average of 10 per cent, while the students who viewed the older animals increased their performance by five per cent on average. The images of food, however, appeared to have little or no effect on improving the work-rate of the third group.

In conclusion, the researchers said the study provides evidence that 'perceiving cuteness exerts immediate effects on cognition and behaviour in a wider context than that related to caregiving or social interaction'.

What do you think of the study? Is it all a shaggy dog story, or do you think the researchers are on to something? Please let us know by commenting in the box below. We’d also love to hear any stories you have about pictures of your pet at work.