Pets in the news: giant rabbits and puppy love 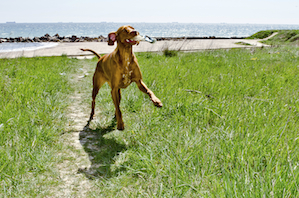 Pet news sometimes looks like it starts and ends with the fluffy stories about surfing spaniels or commuting cats that appear at the end of the Six O’Clock news.

However, pets are big news, and April has been another interesting month for them and their owners. Here is our round up of the pet stories that have caught our eye at Petplan over the past few weeks…

The Telegraph leads the way with some great news for owners of mischievous puppies – according to a new study, those naughty pups are more likely to turn out better behaved than their less bothersome counterparts.

A study carried out on 71 German Shepherds – identified as potential working dogs by the Swedish military – found that puppies who were described as “restless” were likely to perform better in the ‘temperament test’ carried out when they were between 15 and 18 months old.

So, there’s hope for your naughty puppy yet!

Meanwhile, the Independent is reporting something any pet lover has known to be true for a long time – that pets are capable of love.

Researchers at the Claremont Graduate University in California have found that pets release oxytocin in intimate situations, including a goat at an animal refuge in Arkansas who appeared to be in love with his dog playmate!

For a more detailed look at the fascinating findings, take a look at The Atlantic’s original article on the study.

Finally, Britain is officially home to the world’s largest rabbit. The Worcester-based bunny – called Darius – weighs three-and-a-half stone and is 4ft 4in tall.

According to the Metro, he eats around 4,000 carrots, 120 cabbages and 430 bowls of rabbit mix a year at a total cost of £2,500 – all of which has contributed to him holding the Guinness World Record for the title of World’s Biggest Rabbit.

Have you seen any pet stories that we’ve missed? Let us know of any interesting or downright unusual things you’ve read about below…