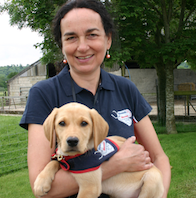 ‘When I was accepted to be a puppy parent, I was very excited and could hardly wait for the puppy to arrive. I went to the local charity shops to buy bedding and lots of soft toys and picked up all the necessary equipment from the Hounds for Heroes centre – all I needed was the pup!

The day before he came, some doubts began to trouble me. Would he howl all night and keep the family awake? Would I miss not being able to go out without making arrangements for someone to look after him? Would he chase my rescue hens?

But as soon as I saw Bunker, I forgot my worries.

He was so full of enthusiasm for everything from the moment he arrived, exploring the kitchen and his new toys. The best thing about him is the way he really loves people (as I write this he is sitting on my feet), and he always does his best to please.

My first job was to take him to his toilet area as learning to go to the toilet on command is very important for an assistance dog. And I was going to do a lot more of that over the coming weeks.

Then we attended our first training session together. Hounds for Heroes use clicker training and I was shown how to lure him into a sitting position, click as his bottom touched the floor and give him a treat. Bunker loved all the attention and treats!

After working with him at home for a few minutes per day for a couple weeks, we were able to startverbal commands. We’re now working on the commands to lie down and stay.

Teaching him to walk on a loose lead with his attention on his handler was the most challenging — Bunker found the smells in the countryside very exciting and wanted to investigate. However advice is always available and it seems that the treats I had been using were not desirable enough. Small pieces of very smelly garlic sausage and Stilton seem to be doing the trick.

An important part of Bunker’s training is socialising, so I have taken him to all sorts of places: town centres; supermarkets; Gatwick airport; stations; agricultural shows and other places where he meets many distractions and he seems to be taking it in his stride.

So have my fears been realised?

Well, Bunker slept through the night right from the start and the hens have made sure that he maintains a healthy respect for them by totally ignoring his efforts to make them run away.

I sometimes miss the freedom to go out for the day, but Hounds for Heroes have volunteers to provide cover for the puppy parent to take a break, so all that’s required is a bit of planning. Any inconvenience is more than made up for by the company he gives me and the interest of watching him develop, hopefully to make a partner for a hero who needs his help.

The worst bit? Standing in the garden in the early morning rain, wearing my dressing gown, telling him to go to the toilet.

The best bit? The feeling of euphoria when Bunker first ran down the garden to use his toilet area on his own. Bunker got a whole Bonio for that and I wanted to crack open a bottle of Champagne!’

Share via Email Share via Email Share on LinkedIn Share via whatsapp Share on Twitter Share on Facebook Share this article:
Back to top
Royvon-Dog Hotel
Every day, family dogs are surrendered to animal shelters because pet owners are overwhelmed by dog behaviors they can't manage.However a well trained dog fosters a positive relationship between the owner and the dog to build a lasting, emotional bond based on trust and respect. You must make your dog listen and pay attention to the way you’re trying to communicate creating healthy and friendly environment for your dog.Dog hotel
Posted on: September 17 2012
Christopher
Hurrah, that's what I was exploring for, what a material!present here at this weblog, thanks admin of this website.
Posted on: November 11 2014