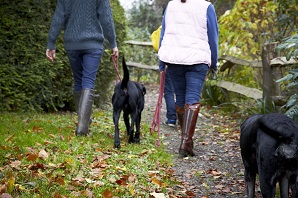 Petplan vet Brian Faulkner has once again taken time out of his busy schedule to tell us all about some of the strange, funny and sometimes difficult cases he encounters in his surgery.

This month, he tells us about two very similar but very dangerous and largely unknown conditions that every dog owner needs to be aware of; Alabama Rot and Seasonal Canine Illness.

Alabama rot was first identified in the USA in the 1980s, which at the time was thought to only affect Greyhounds. Worryingly, symptoms consistent with this disease have now been recorded in the UK.  The first case in the UK was recorded in the New Forest in 2012 with further cases suspected in Cornwall, Surrey, Nottinghamshire, Worcestershire, Co Durham and Norfolk.

Before explaining further, I am keen to stress that so far this problem is limited to a confined number of animals and any diagnosis of the condition would only come as a result of further examination.

Here’s what you need to know…

What is Alabama Rot disease?

Largely associated with Greyhounds in the USA, Alabama Rot is an extremely serious condition which has been known to cause kidney failure in affected dogs.

The disease damages blood vessels in the skin and kidneys, which prevents the blood from properly filtering through.

Unlike in the US, the condition is not targeted towards one single breed, sex, age or weight of dog but has been seen across many different types.

The first symptoms are often skin lesions, which begin on the legs, chest and abdomen and spread across the skin, which do not heal and can develop into ulcers. Affected dogs often become very lethargic with a loss of appetite and potential vomiting.

Left untreated the dog can then develop acute kidney failure, so treatment by a vet is vital. If your dog develops skin lesions following a walk (even up to a week later) you should seek advice.

How is it treated?

If you notice skin sores on your dog, especially around the joints, take them to see a vet as soon as possible to have them checked. Your vet will run a general health screening and examine the sores to rule out any other possible diagnosis.

Blood and urine tests will be used to establish kidney function. If the kidneys have been affected, your vet will begin a course of intensive treatment to restore kidney function. The skin sores will need to be dressed and cleaned to prevent any infections occurring.

Alabama Rot can be fatal for dogs. It is a very fast moving condition, which can appear at any time. Currently there is no known cause for the condition, so if you notice any of the symptoms, it is vital to contact your vet as soon as possible to increase their chance of survival.

Occasionally during autumn, between August and November dogs of any breed, size or sex can become ill quite rapidly after being walked in woodland areas.

What is Seasonal Canine Illness?

Dogs have been known to become very unwell, quickly without prior warning. This mystery disease is largely unexplained and can be serious for your dog so it is important to be aware of the signs and symptoms linked to it.

As with Alabama Rot, symptoms of SCI usually appear up to three days after a walk in wooded areas and include vomiting, diarrhoea (watery to bloody), abdominal pain, lethargy, anorexia, shaking and trembling (muscle tremors), and fever. The disease has no clear explanation or preventative measures

How is it treated?

It is advised to contact your vet if you spot any signs or symptoms listed after walking in wooded areas.

The majority of dogs affected will make a full recovery if treated by a vet, who will administer fluids and antibiotics by a drip.

If your dog does contract Alabama Rot or Seasonal Canine Illness, having the right dog insurance is vital to ensuring your pet is covered for treatment.