Stories from the surgery: why e-cigarette nicotine is dangerous for cats and dogs 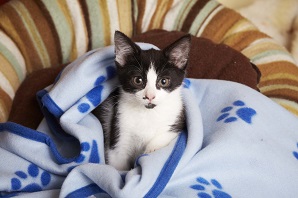 Petplan vet Brian Faulkner has seen plenty of strange and interesting things in his career and this month talks us through a new problem that he and his colleagues have come across.

As a vet with 20 years’ experience it’s rare for me to come across anything that I haven’t seen before.

However, after meeting with some fellow vets recently, talk turned to a new problem that can cause your cat or dog serious harm – e-cigarettes.

E-cigarettes pose a serious threat of poisoning to dogs and cats which many pet owners don’t realise.

The nicotine-delivering devices are becoming a more significant threat to pets. While dogs account for the majority of cases, nicotine in the e-cigarettes and liquid refill solution is toxic to cats as well.

What makes e-cigarettes toxic to pets?

The issue is the amount of nicotine in each cartridge (between 6 mg and 24 mg), which contains the nicotine equivalent of one to two traditional cigarettes. However, purchase packs of five to 100 cartridges multiply that amount many times over, posing a serious threat to pets who chew them.

For example, if a single cartridge is ingested by a 25kg dog, clinical signs of poisoning are likely to occur. But if a dog that weighs 5kg ingests the same amount, death is possible. Dogs of any weight that ingest multiple e-cigarette cartridges are at risk of severe poisoning and even death.

In addition to the toxicity of nicotine, the actual e-cigarette casing can result in oral injury when chewed, and can cause gastrointestinal upset with the risk of a foreign body obstruction.

Pet owners should be very careful to store them – along with all component parts of e-cigarettes – out of the reach of pets such as handbags that are left on the floor.

What happens when e-cigarettes are ingested by pets?

Nicotine poisoning in pets has a rapid onset of symptoms – generally within 15 to 60 minutes following ingestion.

Symptoms for dogs and cats include:

What to do if a pet is exposed?

Because nicotine poisoning can happen so rapidly following ingestion, prompt veterinary care can mean the difference between life and death for a pet – so get your pet to your vet as soon as possible.

Your vet may undertake the following measures:

As always though, prevention is the best medicine. E-cigarettes, cartridges and vials of refilling solution should always be kept out of the reach of pets and children.

Do you have any experiences with similar problems? Let us know your stories below...

Share via Email Share via Email Share on LinkedIn Share via whatsapp Share on Twitter Share on Facebook Share this article:
Back to top
A Ball
You are so ignorant you stupid stupid people. 2.5 million people in the UK alone use ecigs instead of smoking which has had a huge decrease in deaths and cancers caused by smoking. Now if people stop using ecigs they will smoke and this is in statistics therefore all those poor pets will be inhaling secondhand smoke again, not a little vaper and nicotine that they are from ecigs. So why don't you start bleating on about the affects that smoking has on animals and stop attacking ecigs when these are clearly doing more good than harm to both humans and animals
Posted on: July 15 2015
Patricia Sanders
do not be ignorant, all this is doing is advising people be careful where they leave the nicotine, I am glad to be told as I would hate to lose a pet to poisoning, it is no different to advising to keep out of reach of children, it is not saying don't use them it is saying be careful because people feel the need to have flavours which could tempt animals or children so grow up and read the whole piece before being critical of the post
Posted on: July 15 2015
carole
A. Ball. How quick you were to defend your habit and you hadn't even read the article properly. Who is the ignorant party here, with all due respect, maybe you should read and digest information before being critical of professionals who have clear evidence of the outcomes, never should anyone decry what is going on in all sorts of research these days.Dogs, cats, small children, they all have the same enquring minds, anything will go into the mouth. Children esp, who see their parents sucking on these adult dummies will only copy cos they think it's the normal thing to do. Nobody is stating that you should give up, just be responsible.
Posted on: August 30 2015
Nat
Well i am an ecig smoker and to be fair you should store the liquid in a safe place. Mine gets put on side were my boy cant get too it. He had one of my bottles once thankfully an empty one that i literally just dropped but if it wasnt n i didnt notice it could of been alot worse. Use your brain people if u have kids would u leave it lying around? Nope.. same with animals if they see something they can grab they will get.. simples.. no rocket science..
Posted on: October 19 2015
Petplan
Hi Nat,Thanks for your comments Nat. We hope you enjoyed our blog post. Please do visit again as we post a new topic weekly. ThanksJade - the Petplan Team
Posted on: October 20 2015
Jim
And this is why E-Liquid bottles clearly state - keep out of the reach of children and pets. This is the equivalent of moaning about the risk of trapping your bear in bear trap that clearly states - keep away from bears you don't want to trap. Absolute pointless click bait at the expense of those trying to quit smoking, trying to push your shitty pet insurance by tapping into a subject of debate.
Posted on: October 20 2015
Elke Schluter
I think all people who have animals and children should make sure not to leave anything laying around what is poison. as an example cigarette user I always make sure my stuff is well out of reach of my work derful dogs.i could not forgive myself if I would find any of my dogs sick because I was uncarefully. lots of people do that care enough these days, what's so sad.as an animal owner we have the same responsibly as parent with kids.so before you get an animal get good information what's poison that includes not only e and cigarette it includes chocolate , gaps , raisins, artificial sugar, and much more.Also I am a smoker, I would never smoke in a room when windows are closed or even in my car.pets inhale the poison and can get very ill.Make sure if u smoke like me, not to smoke around your pets.
Posted on: October 20 2015
Hasse Karlgreen
In the home, a number of cigarettes are used. The cigarettes produce dangerous smoke. It is not only bad for children and non-smoker but it is also not good for pets and animals. The second hand smoking causes many problems to cat and dogs.
Posted on: March 28 2016