Summer update on Bunker, the Hounds for Heroes pup 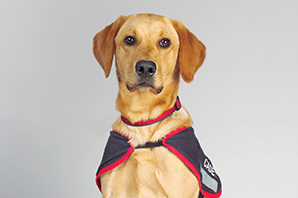 It's time to catch up with trainee assistance dog Bunker as he prepares to graduate. Also, find out what else has been happening at Hounds for Heroes, the charity that sponsors him – including the Endal Awards, which celebrate heroic dogs.

As you can see, Bunker is definitely growing up – although his trainers say he's still as soft as butter and totally loveable. Puppy parent Grace says Bunker has been working on walking nicely next to a wheelchair or crutches, getting ready for when he graduates.

Bunker and all the other trainee pups have enjoyed meeting a special visitor to Hounds for Heroes HQ in the last few months, dog handler and behaviour expert Sarah Fisher. She came to show all the puppy parents the gentle and effective Tellington TTouch method, which includes very gentle massage techniques. Grace says Bunker really relaxed and enjoyed his session with Sarah.

More and more behaviour experts will be dropping into Hounds for Heroes HQ over the next few months, helping the puppy parents prepare their precious dogs for their very important work.

It's been a busy few months at Bunker's charity, Hounds for Heroes, too. It held the annual Endal Awards, which honour the memory of the first dog that assisted Allen Parton, Hound for Heroes' founder. Endal quite literally saved Allen's life after he returned from duty in the Navy having suffered a massive head injury that robbed him of his memory and mobility.

Endal's unconditional love, zest for life and amazing intelligence gradually put a very broken and depressed Allen back together. So much so that Allen renewed his marriage vows (with the woman he still couldn't remember marrying) and went on to found Hounds for Heroes, in order that other people like him could also benefit from the amazing Endal effect. It's one of the fastest-growing charities in Britain, so Endal really did a brilliant job!

All the winners of the Endal Awards are remarkable. But one of the medal winners this year was a dog that most Petplan customers will already have seen in PetPeople magazine and on TV programmes such as Crufts and Paul O'Grady's British Animal Honours.

Three-legged Haatchi's story – and that of Owen, his best pal from his adopted family – is incredible. Read about it in a previous blog here. Sadly, Owen had to attend the Endal awards without Haatchi who hurt his remaining back leg and dislocated his knee during a fall. When Petplan heard about his accident, the company stepped in and agreed to pay for Haatchi's surgery as part of the pair's medal prize.

Thankfully, Haatchi is on the road to recovery after the operation and hydrotherapy – and his friendship with Owen is as strong as ever.