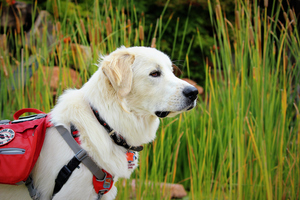 With the recent news of the heroic police dog Finn, who risked his life to protect his handler, PC Wardell, Petplan have decided to look back at their most inspiring service animal stories.

The PDSA Dickin Medal is the highest honour awarded to serving animals globally and has been bestowed upon only the most inspirational and selfless dogs, horses, pigeons and even a noble feline!

1. Irma: The heroic service dog for the Civil Defences of London during World War II

Awarded with the Dickin Medal on 12th January 1945, Irma (formerly known Crumstone Irma) earned the award by assisting in the rescue of 191 people trapped in destroyed buildings during and after the Blitz.

The noble Alsatian had the ability to determine whether a victim was dead or alive, saving both time and lives throughout the salvation mission.

Irma’s instructor, Margaret Griffin, was too awarded for her impeccable training and courageous accompaniment of dogs during the rescue missions, receiving a British Empire Medal for her own contributions.

2. Salty and Roselle: The loyal guide dogs who saved lives in the 9/11 World Trade Center attack

These two valiant Labrador guide dogs were presented with the Dickin Medal on the 5th March 2002 for remaining by the side of their blind owners and guiding them to safety down an incredible 70 floors, during the terrorist attack on New York in September 2001.

The canine heroes directed their trusting owners through debris until they were away from harm. The dependable companions also assisted several other people caught in the attack and led them to safety too.

This was just the second time a joint Dickin Medal had been awarded. The remarkable pair received several additional honours too, including ‘Partner’s in Courage’ and ‘Hero Dog of the Year’ titles.

3. Diesel: The gallant police dog that protected lives and sacrificed his own following Paris terror attacks

PDSA honoured Diesel with the Dickin Medal on 28th December 2015 posthumously after his honourable efforts in hunting down perpetrators on the Paris terrorist attacks months prior.

Diesel passed away following multiple gunshot wounds when scoping out an apartment during a raid with the armed police in November 2015.

The tragic incident resulted in grief of the nation with France nominating Diesel for the Dickin Medal to continue the legacy of a hero. PDSA responded with the following statement: “His gallant actions helped to protect human life in the face of imminent danger and we are very proud to honour him in this way.”

4. Warrior: The brave war horse who fought beside the Canadian Corps Cavalry during WWI

Awarded the Honorary PDSA Dickin Medal posthumously on 2nd September 2014, Warrior is the only recipient who receives this unique award on behalf of all animals that served in the First World War.

Warrior was dubbed ‘the horse the German’s could not kill’ as he led the charge of the cavalry in some of the most unforgettable and ruthless battles of World War I. Serving on the frontline, Warrior was no stranger to machine gun attacks, falling shells and fire. His fearlessness and gallantry in the face of war was inspirational to the soldiers, teaching them to overcome their fears in battle.

Warrior survived the Great War were others fell, returning home in 1918. He receives the Honorary PDSA Dickin Medal in honour of all animals in World War I, whose contribution predate the awards’ creation.

5. Simon: The surprisingly useful cat who snuck aboard the Royal Navy sloop HMS Amethyst during the Yangtze Incident

PDSA awarded the Dickin Medal to Simon posthumously in 1949, and he remains the only feline to have received the award in the institution’s history!

Simon served on the Royal Navy’s HMS Amethyst and was known for his cheeky persona which was loved by all aboard. He acted as a lucky mascot to the crew and proved extremely useful when killing off a rat infestation.

Simon came under attack during the Yangtze Incident, and although he survived the injuries, he died of a viral infection in 1949. He is one of the most decorated cats in history, receiving the Blue Cross Medal and Naval General Service Medal in addition to the PDSA Dickin medal for ‘behaviour of the highest order’ during his service.