Caring for dogs in their later years 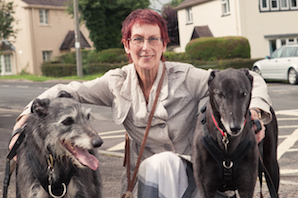 We all love our pooches, but what happens to them when their owners are no longer able to look after them? Michele Simmons meets the Oldies Club, a registered charity with 40 dogs in its care.

It all started back in 2005 with a 13-year-old Collie called Ted. He was blind in one eye and was found wandering the streets of Warrington, looking very thin and terrified of the cars.

He was taken to the pound where he had to wait for seven days, alone and frightened, to see whether anyone would claim him. But no one came forward, so rescue homes were contacted to get Ted into foster care.

Initially, rescue groups and their associated chat forums were concerned because Ted really was an oldie and families seemed to want puppies. So they put Ted’s picture and story online – and suddenly they were swamped with offers from people wanting to offer him a new home. Even better, once he went to his fosterer, Ted thrived and the skinny, dull-coated, nervous Collie became a healthy, active and fun-loving dog.

Many of those rooting for Ted felt that the support people had shown him could be channelled into helping other older dogs that were in need of rehoming. From that germ of an idea, the Oldies Club was born.

‘Ted was the original poster dog for the Oldies Club, and did so much to promote the rehoming of older dogs,’ remembers Fiona Chalk, one of the founding members of the Oldies Club. The organisation became a registered charity in 2007 and now has around 80 fosterers on its books.

‘We don’t have kennels or a central base because we prefer to care for them in a normal home environment,’ explains Fiona. ‘That’s why we use foster homes that are spread around the country, and each of them has been carefully checked so we can be sure the dog will be happy, safe and well cared for.’

Most of the dogs who find their way into the care of the Oldies Club are handed in from the public for a variety of reasons. ‘Being older dogs, they can belong to older people who may get ill, go into homes or die,’ says Fiona. ‘We’re also increasingly finding that people are having to move into rented accommodation and they either aren’t allowed a pet or can’t afford one.’

In fact, while a dog is being fostered, the Oldies Club pays all the bills and meets all costs, so the fosterer just needs to concentrate on caring for the dog.

Anyone can foster, according to Fiona – ‘you just need to love dogs and be at home some of the time during the day’. But while the benefits for the animal are obvious, what’s it like actually taking up the role of foster carer? 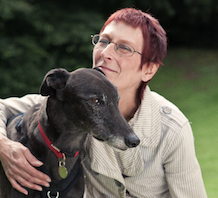 ‘Absolutely brilliant,’ says fosterer Lisa Tenzin-Dolma (pictured), who has a five-year-old Lurcher called Skye and recently gave a home to 10-year-old Duke. ‘Older dogs are so easy to live with. They’re eager to please and they make wonderful companions.’

Although Lisa has fostered several dogs over the years, she says that ‘after a week of fostering Duke I knew I didn’t want to let him go’.

In his early years, Duke was a champion ex-racer who was brought over from Ireland to race. In later years, he found a home with a couple, but the family had a toddler who was becoming mobile and Duke wasn’t happy around her.

As the months wore on, the family realised that Duke needed to be rehomed and contacted the Oldies Club, which is how he ended up with Lisa. ‘When Duke first arrived he was suffering from separation anxiety and he followed me around everywhere,’ she remembers. ‘He just wanted to know where I was and so I made sure I was always around. Within a week, he was fine.’

Lisa reports that now Duke is settled, he is affectionate and pretty active, enjoying daily walks with Skye. As for Lisa herself, there is no doubt that she feels there are huge advantages to having an oldie.

‘What older dogs crave is companionship,’ she says. ‘They just like to know you’re there. They are ideal if you don’t have lots of time or energy, and give so much in return.’

So will she foster again? ‘For sure. I feel very strongly that elderly dogs need a home. A kennel is no place for an older dog. But if you put them in a proper home, they just blossom.’