Go behind the scenes as this cat owner shares her thoughts on life with a pet, and what shooting a TV advert is really like. 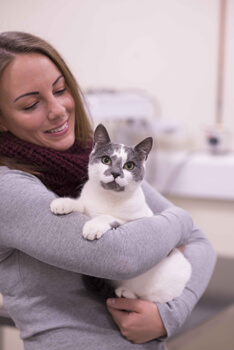 I hand-reared Elijah, so we have a special bond. I'm a veterinary nurse, and when I got back from a 15-month stay in Australia in 2016 I had the chance to take in Elijah, his brother and two sisters. I've hand-reared kittens before, and it can be hard to do while also juggling work. But I hadn't started a new job yet, so I had all the time to dedicate to them and we spent every day together until they were about 14 weeks old. It was my ideal situation: just being with a room full of kittens!

We faced some highs and lows early on. When Elijah was tiny and I was weaning him, he wasn't suckling very well. For a couple of days I was really worried, especially as his brother had Fading Kitten Syndrome and passed away the week before - which was really traumatic. It took another a week until he started eating, but when he finally did it was heavenly.

Elijah is a ball of mischief, he gets himself into all kinds of situations! My neighbours recently told me that he manages to get into their house every day. They don't have a cat flap, he'll just sneak in through an open window or door, jump up on top of their fridge and make himself at home. I had no idea he was doing it, but luckily my neighbours love animals.

He doesn't understand that if he does something once and gets into a scrape, he shouldn't do it again. The other week he was chasing a ball of paper and it went under the washing machine. He dived for it so hard that he got his paws stuck underneath, and I had to lift it up to free him. Just a few seconds later I saw him run back to try and get the paper again - he doesn't learn! I have the highest possible Petplan cover for him, as I just think that if he gets himself into these situations, we need to be protected.

When it came to filming the Petplan ad, Elijah was the perfect little star. There were dogs everywhere, but he was so chilled. He just looked up at me like, 'What's going on? When can I go and eat some food?' - just like he would at home. But the funniest thing was when they were trying to capture a good shot of his face: every time they came in close with the camera, he'd look the other way!

To find out more about the pets and owners featured in our new ad, head to our Facebook page. Plus, you'll be able to enter our competition to win a £500 holiday voucher!