Could you adopt a rescue animal? 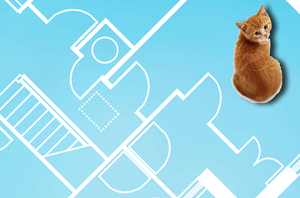 There are many thousands of pets in the UK in need of a good home and the decision adopt a rescue pet is usually a hugely rewarding one. But, while every animal has its individual requirements and temperament to consider, there are a few additional factors to bear in mind when you take ownership of your new friend.

A new world
In many respects, rescue dogs, cats and rabbits are the animal equivalent of foster children: they will have formed attachments and associations with previous owners. They are no different to humans in that, so when a relationship breaks down it's usually followed by a period of insecurity. So it helps to remember how nervous and unsure of himself and his surroundings your new pet may be feeling.

Once you have arrived home, if you have a rabbit you should put him in a clean, pre-prepared hutch with a water bottle and a dish of dried food. A dog or cat should be transferred to a quiet room - give him an hour or so still in his carrier to absorb the new smells. Then, open the carrier and allow your pet to decide for himself when to venture into the room and, eventually, the home.

While you shouldn't crowd your pet, one or two members of the family sitting nearby can allow your cat or dog to seek them out for reassurance if he wants to. Some dogs will leap out like a playful puppy, while others will hesitate to leave the comfort and sanctuary of their safe space initially. Cats often dart towards the first available bolt hole of their choice, taking shelter under furniture. Whatever happens, it's important at this stage not to try coaxing your pet out - let him make the first move in his own time.

The next stage is to allow a happy cat or dog to explore your home. You can give your dog a chance to explore the garden or backyard, providing the area is secure and there's no chance of escape. Cats, on the other hand, need to establish their home territory first, so they should only be allowed out into the garden after about seven days of 'house arrest'. It would be disastrous if your cat escaped and got lost before having a chance to familiarise himself with his new surroundings.

Another way to help your rescue animal accept his new home is to plant one of their 'toilet samples' (eg a sample of their faeces or a soiled newspaper) in your garden. Placing a toilet sample in your garden may help your dog or cat believe they have already marked their new territory, and can encourage an animal to mark or 'scent' again. The rescue organisation might stare with disbelief at a request for toilet samples from your new pet, but it's worth a try!

With a rabbit, once he has been in the new hutch for a day, introduce him into a grazing frame on the lawn or grass area, or offer freshly harvested grass or hay. Avoid offering fresh vegetables to start with because this can lead to loose bowel movements. It can also help a nervous bunny feel more secure if you provide a sturdy cardboard box turned on its side within the frame to provide a refuge.

One of the family
If you already own other pets, ask the staff at the rescue organisation whether they know if your new friend has been socialised with other animals. If they don't know, you will need to handle this carefully. Introductions with other dogs should take place on neutral ground. Any signs of a challenge or aggression in either animal will indicate that integration needs to be undertaken gradually. If this is the case, then it's a good idea to use travel crates or carriers to initially separate dogs or cats. One can be let out and given the 'run' of the available space and then the other can be given the same freedom. When you feel the time is right, you can try releasing both dogs together and give them each a reward (either in the form of attention or treats) if they behave. If they don't, use training discs to control any behavioural issues: your dog will soon learn the association between the sound of the metal discs and his incorrect behaviour.

If your new dog hasn't been socialised with cats and you have some in the home (or vice versa), then early introductions must again be controlled. Give a cat the opportunity to escape any unwanted attentions and tether a dog until the initial meeting(s) has proved successful. If your new dog chases after your cat, then it's vital the dog is restrained or recalled, and then rewarded at your side. Puppies will usually adapt quite quickly to the presence of cats and vice versa - most of the attention on both sides will be based on natural curiosity and play.

The best time to introduce children to a new dog or cat is during a play session, which should be brief and interesting, and in a quiet room or, in the case of dogs, in an open area outdoors where there's some containment, such as a garden fence or a hedge. A game that involves retrieval and reward with a treat is the best method to develop a controlled interaction with a dog.

With a cat, providing your child is old enough to hold a cane and string with a feathered toy attached â€“ the cat can then play with it. All animals respond to change differently, so there is no one-size-fits-all timescale for success. But, with the correct handling and care, almost any realistic target can be achieved.

Helping a rescue animal less fortunate than others is a wonderful act of kindness and offers great satisfaction to the owner in the long term. Successfully caring for any animal once it has been rescued is worthy of the praise of pet lovers everywhere.

Originally published in issue 2 of PetPeople, the Petplan customer magazine

Share via Email Share via Email Share on LinkedIn Share via whatsapp Share on Twitter Share on Facebook Share this article:
Back to top
Brenna Taomoto
Hey! excellent examine as soon once. I the fact is like checking out your site purpose you commonly give us terrific articles.
Posted on: February 02 2011
math games
thanks
Posted on: February 05 2011
Margaret Stewart
We got our lovely little westie from a rescue, Westie ReHoming (www.westierehoming.ME.uk). They gave us a month free insurance with PP. Haven't needed it yet, but glad we carried on and pleased to have the reassurance that it is there if we need it.Interesting tips on introducing rescue dogs. Westie ReHoming told us the importance of not overwhelming the dog for a while and letting her get used to her environment before socialising her - vet, groomer, family, cuddles etc. They were very good and helpful and it paid off. Love your articles and look forward to more.
Posted on: February 18 2011
ADELE BENNETT
We'd love to adopt a Doberman. We have a fantastic male dobi now three years old and he is a big softy. All typical dobi traits and is spoilt rotten. I've asked loads of different people their advice about introducing either a male or female dobi in to his house but keep getting conflicting advice. Any body got any suggestions as I really don't want to upset or change the behaviour of our dog.
Posted on: February 18 2011
farefac.com
These are basically brief term loans that do offer you meet your fiscal challenges inside a desired precise time period.Considering time limitations these loans are particularly created above an obligation cost-free platform.As such, these are kept entirely cost-free from credential checksums.Difficulties such as defaults, arrears, bankruptcy, CCJs and even IVAs are not viewed as right here.Additional, there are also no collaterals related with these loans.There is minimal paper work essential on the element of borrower.There are also no hidden or additional documentation or faxing essential right here. Applying for these loans is also very hassle-free.Folks simply need filling an on the internet type and as soon as this gets approved money is received within 24 hours time frame.These loans are typically provided beneath hassle-free terms and conditions.The basic basic applicant criteria here is that they should be a UK resident and of 18 years of age.
Posted on: December 25 2012
phoenix golf professionals
Greetings I am so excited I found your website, I really found you by accident, while I was looking on Askjeeve for something else, Anyhow I am here now and would just like to say thanks for a remarkable post and a all round enjoyable blog (I also love the theme/design),I don't have time to go through it all at the minute but I have saved it and also added your RSS feeds, so when I have time I will be back to read a lot more, Please do keep up the superb work.
Posted on: May 31 2013