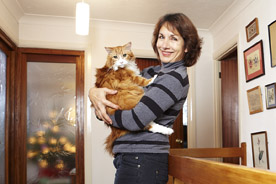 Weeks after getting her characterful cat Horace, Janet Parnell discovered he had diabetes. Luckily, a Petplan Covered for Life policy means Horace gets all the treatment he deserves. From the current issue of PetPeople magazine.

The moment she spotted Horace on The Blue Cross website, Janet Parnell knew he was the cat for her. 'It was love at first sight,' she says.

However, within a few weeks of starting his new life, Janet and husband David became concerned that Horace was drinking excessively, sleeping a lot and not grooming.

'David has diabetes, so I knew that extreme thirst is one of the symptoms,' says Janet. A trip to the vet confirmed her suspicions, and that Horace would require insulin injections every day for the rest of his life.

'I didn't know diabetes was common in cats,' says Janet. 'But I wasn't worried. I've often given my husband injections and the vet showed me how to inject into Horace's scruff.'

Expense wasn't an issue, either. Petplan covers cats, dogs and rabbits adopted through The Blue Cross with four weeks free insurance. Horace was already covered, so Janet simply needed to renew the policy and take out lifelong cover.

Thankfully, Horace began to feel better, although it took several months for the vet to work out the ideal dose. Meanwhile, Janet introduced a strict mealtime schedule. But a year later, Janet found him walking in circles and staring blankly with dilated pupils. 'I thought he'd had a stroke and rushed him to the vet in tears,' she says.

In fact, Horace's blood sugar level had dropped dramatically and he was suffering from hypoglycaemia. He was treated for the condition with a sweet solution delivered intravenously.

Horace suffered another severe hypoglycaemic attack in May 2009, which resulted in Janet's daughter rushing him to an out-of-hours vet, but he has been well ever since.
For the past year, Horace has been having twice-daily injections with a new type of insulin. And Janet has trained up neighbours, her daughter and brother-in-law to stand in if she and David are away.

'Having added up all my claims, I realise how fortunate we were to have a Petplan Covered for Life policy,' Janet says. 'And Horace is a fantastic character who only needs a little more attention than the average cat.'
Amanda Riley-Jones