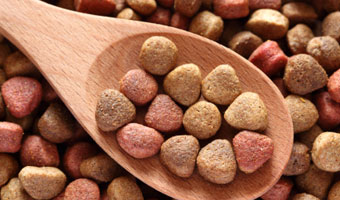 Last week, Dr Ian Billinghurst told us about his view that dogs should only eat a Biologically Appropriate Raw Food (BARF) diet. Now here's the other side of the argument, from vet Brian Faulkner

"The BARF diet is based on the assumption that dogs are the same as their ancestors: wolves. But they are a domesticated species with different DNA to wolves; a distinction going back many thousands of years.

Furthermore, all dogs are not the same. A Great Dane or a St Bernard may grow more in one week than a Yorkshire Terrier will grow in its whole life. The nutritional requirement of these dogs is significantly different.

While it is hypothetically possible to achieve a balanced diet using bones and raw foods, even 'experts' in the BARF diet admit that this is hard to do 'by eye' and expensive to do in the laboratory. Getting the correct balance of minerals is critical in young dogs. Meats are high in phosphorus, an excess of which can lead to an imbalance of calcium and inadequate bone formation. Similarly, an excess of calcium in younger dogs, especially large breeds, is associated with joint problems such as elbow and hip dysplasia.

A diet of bones and raw meat still requires vegetables and fruits to ensure an adequate intake of both insoluble and soluble fibre, the latter of which passes into the large intestine and is then broken down by the 'good' bacteria that live there. A shortage of soluble fibre can lead to overgrowth of 'bad' or pathogenic bacteria.

Raw meats contain many more pathogenic bacteria - such as Salmonella - than cooked foods. These bacteria not only pose a risk to your dog, but the contamination of your home with raw food, and the excretion of these bacteria by your pet, can also act as a significant health risk to people, in particular children or anyone who is immunocompromised. Finally, ground bones can get lodged in the gums and the intestines, potentially leading to perforations and impactions."

What do you think about the raw meat diet? Let us know by commenting below...