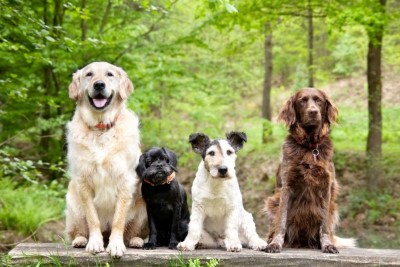 The history of dogs

For a long time now the history of dogs and humans has been intertwined. We evolved alongside each other and in turn, formed a symbiotic relationship, providing for one another and helping each other out. The domestication of dogs allowed us to become much more effective as hunters which in turn allowed us to advance as a civilisation and provide for our new companions better than ever before.

The origins of dogs

It’s no surprise that today’s modern dogs are largely agreed to be descended from wolves, in fact, there has been no evidence to indicate another canine contributing to the genetic lineage of dogs at any point in history.

While the closest living relative to our dog's ancestors would be the modern grey wolf, there is a general consensus that the wolves of today have little in common with the wolves of the past.

The common ancestor shared by modern grey wolves and modern dogs is believed to have been a now-extinct animal known as the Late Pleistocene wolf. Think of today’s wolves more like dog’s cousins, only separated by thousands of years of genetic mutations instead of an aunt or uncle.

When exactly dogs split off from their lupine cousins to forge their own genetic path is a not entirely known, although there is a rough idea. In 2013, after the whole genome sequence of modern dogs was completed, it was estimated that the divergence of wolves and dogs took place around 32,000 years ago.

Similarly, other variations of wolves that are known to have split at the same time were also dated to 35,000 years ago, by cross-referencing radiocarbon-dated samples with present specimens mutation rates.


From wolves to dogs

However, in terms of where this split occurred, there is still some debate, although it’s widely accepted that this occurred in Europe and Asia. Ancient lineages of dogs are more easily identified in Asia than in Europe but this could be due to Victorian-era advances in dog breeding which saw many different dog breeds become intertwined depending on the purpose they were bred to fit.

It’s believed that the domestication of the dog may have occurred at this time as hungry wild dogs and wolves encroached on human camps for scraps of food, eventually forming a symbiotic relationship with humans. In turn, these wolves and wild dogs would eventually become tame and trained for hunting, guarding, and eventually companionship.

The earliest undisputed remains of dogs and humans co-existing date back 12,000 years, although there are disputed remains that date back three times this length of time, to 36,000 years. General scientific consensus estimates that it was between 20,000 and 40,000 years ago.

In either case, this shows that the domestication of the dog dates back to before the founding of human agriculture (11,000 years ago) by at least a few thousand years, proving that the ancient wolves were domesticated at a time when humans were still hunter-gatherers.

The domestication of the dog at this time is also supported by the fact that humans were hunter-gatherers. If an animal was to keep up with humans during this time, it would need to be able to survive on meat, be able to hunt and be capable of travelling large distances. For these reasons, it’s easy to see why the dog was one of the first animals domesticated by humans.

As human civilisation settled down and became a more sedentary race, other animals soon followed the dog into domestication, but that didn’t mean we used dogs any less. If anything, we used them more.

While dogs continued as hunters, they also evolved to guard us and our herds, help us eliminate pests, and we have even used them in war since at least 700 BC.

It’s impossible to overstate the impact that the domestication of the dog has had on human civilisation. Archaeologist and geneticist, Greger Larson, said: “Remove domestication from the human species, and there's probably a couple of million of us on the planet, max. Instead, what do we have? Seven billion people, climate change, travel, innovation and everything.”

“Domestication has influenced the entire earth. And dogs were the first. For most of human history, we're not dissimilar to any other wild primate. We're manipulating our environments, but not on a scale bigger than, say, a herd of African elephants. And then, we go into partnership with this group of wolves. They altered our relationship with the natural world.”

As both humans and dogs are emotionally intelligent animals, it’s only natural that throughout our march through history together, we became fast friends along the way. In fact, the science behind this is even more fascinating.

When humans look into each other’s eyes, we recognise the sentience and emotional intelligence that we have which then causes the body to release a hormone called oxytocin, this helps us to form emotional bonds. The same phenomenon also happens in both humans and dogs when looking into each other's eyes - not only do we live together, but we understand each other.

The concept of pet ownership itself is believed to have risen to prominence during the reign of several ancient civilisations, most notably the Egyptians and their deification of cats. Dogs were no different, for as we become less dependent on dogs for survival they became status symbols and most notably, the ruling classes of ancient Greece, Rome, and Egypt all kept dogs as pets.

This isn’t to say that the number of pets was consistently on the rise, in fact, there were a few areas in history that saw a decline. When witchcraft became the focus of the church, it was often the elderly and isolated people in remote areas who kept pets for companionship who became victims. This is because an animal familiar, or animal possession, were all considered aspects of Satanism, which sadly cause an overall decline in pet ownership. How things have changed.

Luckily, this decline in pet ownership was short lived and as we moved towards a more ‘civilised’ world, it gradually became more accepted, although it still wasn’t quite the form of pet ownership we know today.

Modern pets as we know them did not rise to prominence until the late Victorian period. As previously mentioned, this time saw the mass adoption of modern dog breeding techniques, spurred on by Charles Darwin’s On the Origin of Species, which was humanity’s breakthrough understanding of natural selection.

During this period, dog ownership and specific breeds skyrocketed, and the idea of keeping a pet for something other than a specific job became a much more widely accepted occurrence. However, it was still some time before pet ownership was something for everyone. The lower classes, in particular, were seen to be improper if they owned a pet, as that meant they were not attending to their regular duties as efficiently as they should be.

Luckily as time has gone on, we realised just how great dogs are, regardless of our backgrounds and class. We’ve effectively evolved our symbiotic relationship into one that focuses primarily on care and attention, dogs are now seen as an integral component of the typical family unit, and enjoy many protections under the law.

In today’s society, dogs still have a huge amount of work to do, as guide dogs, emotional support animals, guard dogs, and even still in the military - although the vast majority of us are just content to have a furry friend to come home to at the end of the day who loves us in the same way that we love them.