The History of Cats 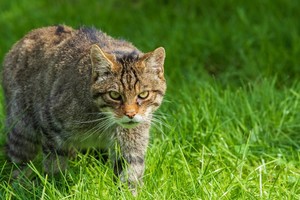 These days, if someone mentions cats, it’s usually in the context of the cat being their pet, their friend, or even a member of their family. However, this has not always been the case, while cats may be a staple of modern domestic life in the present; they have a long and storied history as they evolved alongside humankind and civilization as a whole.

Beginning their evolutionary journey as wild hunters, cats formed a symbiotic bond with early humans and while their roles have changed over time, they have remained inseparable from human society at large. So how did this happen? What fostered this relationship and turned cats from just another animal on earth into an evolutionary partner of humankind. Petplan investigates the history of cats.

Unlike dogs, who have many different and dispersed ancestors across much of the world, modern domestic cats all have just one common ancestor, the North African/Southwest Asian wildcat. These cats were native to what is known as the Fertile Crescent, which stretches along the Nile in contemporary Egypt and spans across Iraq, Israel, Palestine, Syria, Lebanon, Jordan, and even parts of Turkey.

This lush terrain in an otherwise harsh environment provided the perfect incubator for all kinds of early life, including early human civilisation and cats. This environment proved so well suited to cats and their hunting skills that the ancestor species of the domesticated cat, is still thriving in these locations (and beyond) to this day. This contrasts heavily to the ancestors of dogs, many of whom have since gone extinct leaving only their descendants behind.

While it was originally believed that cats were first domesticated in ancient Egypt 4,000 years ago, though this is arguably where they experienced a popularity boom, remains in Cyprus dating back 9,500 years were found interred with a cat, leading many to believe that domestication may have occurred much earlier.

In fact, some experts believe that as far back as 12,000 years, an agricultural boom in the Fertile Crescent, particularly in Egypt and Syria, caused such an abundance of food that it attracted an unprecedented amount of pests and small animals hoping to get their share of the resources. Naturally, this attracted a large number of cats to prey upon this newly bolstered food supply.

From here, much like with dogs, domestication was inevitable. Cats were seen essentially as security guards for food and were rewarded as such. Egyptian culture firmly cemented cats as an integral part of human society, even going so far as to deify them.

Nothing lasts forever, and the Ancient Egyptian empire was no different. After the collapse of the Egyptian royal lines and the territory’s eventual assimilation into the Roman Empire, the cat's global spread became all but assured. The Romans and even the Ancient Greeks had long been trading with the Middle-Eastern kingdoms such as Egypt and Phoenicia and as a result, cats had been used as pest control around the Mediterranean for many years.

Around the time of the collapse of Egypt, cats had also begun to spread to other parts of the world, including India, and even Japan. Though in these far-flung reaches of the world, cats were the domain of only the rich and ruling classes.

However, cats’ reputation and their population were fostered by human civilisation across the world and their skills as pest control, and even companions were enough to propel them to global stardom.

Not all PR is good PR.

However, that isn’t to say that cats enjoyed their rise to their current position without a few setbacks.

During the Black Death in the 14th century when lacking modern medical and biological knowledge, people saw cats as the harbingers of a disease which killed one-third of the European population. This came to a head with numerous European leaders calling for the deliberate culling of cats in order to save humanity. In fact, it’s been hypothesised that the lack of cats to deal with the rodent population may have actually helped the bubonic plague to spread even further.

In either case, the cat’s reputation was not in a great place, and it didn’t really recover until the 17th century.

As the horrors of the Middle-Ages subsided and humanity passed through the Renaissance, cats had slowly rebuilt their reputation as useful companions. In fact, as British and Spanish ships began to impose colonisation on the new world, many ships kept cats in order to protect themselves against pests and the diseases they could spread.

Eventually, cats became popular on both sides of the Atlantic, as well as on the ships that carried them. Another hypothesis regarding the proliferation of cats in America is that the cats who came across with Columbus left his ship and thrived in the wilds of America.

With their close links to humanity, and their finely evolved skills as hunters, it’s no wonder that cats have become as popular with people as they have. While in the developed world, we don’t have to worry about vermin eating our food as much as other parts of the world, we’ve come to recognise the companionship and the emotional rewards that cats can bring to our lives.

Today there are almost 1 billion domesticated cats in the world, and just under 10 million of these cats are in the UK alone. While cats may not have had as much impact on the evolution of human civilisation as dogs, they’ve certainly done a lot to get us to where we are today..

Do you have any interesting facts regarding the history of cats? Let us know in the comments below!