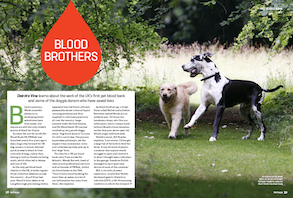 Deirdre Vine tells the story of the country's first blood bank for pets - and explains how you and your dog can contribute. From the PetPeople magazine archive

Blood is precious. While scientific advances in developing blood substitutes have been made, real donors are still the only reliable source of blood for ill pets.

So when the not-for-profit Pet Blood Bank UK (PBBuk) was launched nearly five years ago it was a huge step forward for UK dog owners: it meant vets had quick access to blood to treat critically ill dogs, rather than having to wait on donations being made, which often led to delays and loss of life.

As the only pet blood bank charity in the UK, it holds regular blood collection sessions across the country - 164 of them last year. Blood is then taken to its Loughborough processing centre, separated into red blood cells and plasma (the straw-coloured liquid carrying proteins) and then supplied to veterinary practices all over the country. Large animals make the best donors, and Pet Blood Bank UK has just notched up its 3,000th doggy donor. Dog blood donors? To some it's still a novel idea. The process is painless and simple, yet the impact it has is immense: every unit collected can help save up to four dogs' lives.

The idea for a UK pet blood bank came from across the Atlantic. Wendy Barnett, head of clinical and professional services and co-founder of PBBuk, visited six blood banks in the USA. 'They've been blood-banking for more than 20 years, so a lot of our information has come from them,' she explains.

As blood brothers go, a Great Dane called Shiloh and a Golden Retriever named Brook are an unlikely pair. Yet these two handsome chaps, who live 100 miles apart, have a unique bond: without Brook's blood donation earlier this year, seven-year-old Shiloh might well have died.

Shiloh's owner, Bill Bowler, explains: 'Last winter, I'd bought a large tub of fat balls to feed the birds. It was the kind of plastic container that anyone would struggle to open and I stored it in what I thought was a safe place in the garage. Somehow Shiloh managed to rip it apart and devoured most of the contents.'

Bill, a vet with 26 years' experience, recalls that Shiloh developed gastric dilatationvolvulus (GDV), a life-threatening condition in which the stomach fills with gas and twists over. That evening, Bill performed a three-and-a-half-hour operation on his dog. â€˜It ended around 2am, and by 7am I thought I'd better go home,' he says. 'At that point, I really thought he was going to die.'

After appearing to rally briefly, Shiloh's heartbeat became erratic and a blood test confirmed that he was anaemic. 'I suspected diffuse intravascular coagulation [where small blood clots form inside the blood vessels around the body] and, at this point, contacted the Pet Blood Bank,' says Bill. 'Shiloh received two bags of plasma and two of blood cells. The transfusion stabilised him, and after that, he gradually recovered. I think giving him [another dog's] blood, with clotting factors and red blood cells, made a big difference.'

As more vets become aware that PBBuk supplies blood components, demand is increasing - to date, the bank has provided blood products to more than 460 veterinary practices in Britain. 'This was the first time I'd used the Pet Blood Bank,' says Bill. 'I was very impressed. I'd recommend it; they were unintimidating, helpful and made the process straightforward. As a vet, I'd say to owners, if you have a dog that is eligible to give blood, what could be better than to give another dog a chance?'

The sentiment is shared by Amy Saunders, owner of five-year-old Brook, one of the PBBuk donors who helped to save Shiloh. Amy, a retired nurse and midwife, says: 'It's a gift of life to an animal that might otherwise die - and one day that could be your animal.'

Amy has four much-adored Golden Retrievers: Bliss, and sons Breeze, Brook and Harry. â€˜They would all be donors if they were eligible,' insists Amy. 'Brook is very happy to donate regularly. It's all because of the staff: I have total faith in them. They are all in exactly the right job. They make a big fuss of both Brook and me.'

It normally takes about five to seven minutes for a dog to make a blood donation. 'I choose to wait outside the room while he gives blood,' says Amy, 'and when he comes out, he is given water, food and a goody bag.'

It would be wrong to assume that only pedigree dogs can be blood donors. What is vital is that dogs meet the eligibility criteria (see below), pass the stringent health screening stage and have the right temperament - ideally, they should like to be handled, love attention and be stimulated by either food or human attention. 'We'd be happy to see more cross-breeds coming forward,' says Wendy.

'I could write a book on how particular breeds respond,' says PBBuk's other co-founder, veterinary supervisor Jenny Walton. German Shepherds and Labradors can be among the most co-operative donors, but, says Jenny, 'our favourite repeat visitors are Greyhounds because of their compliant temperament and their anatomy. They're slim, and their veins are very visible. And they have staying power: I'd say 95 per cent of Greyhounds happily remain donors.'

Rottweilers are also pretty good donors, adds Jenny. 'No sooner are they on the table than they lift their back leg up to be tickled, and they lie there contentedly. But Rottweilers have a positive blood type, whereas the greatest demand is for the negative blood type.'

PBBuk is aware that cats need blood too, and is researching feline blood collection with a view to possibly extending its service in the future. Meanwhile, though, the immediate challenge for PBBuk is to balance its supply and demand, and encourage eligible dog owners to register their pets as potential donors. 'Blood donations typically decrease around Christmas and other holiday times, the same as the human National Blood Service,' says Wendy.

Top dog and number one donor at PBBuk is Seamus, a Greyhound cross who is due to retire this autumn on reaching his ninth birthday, but not before making his 20th blood donation. His was the very first donation given to PBBuk, and Seamus has donated every three to four months since then.

Could your dog be the next Seamus? PBBuk hopes so.

To be eligible to donate blood, your dog should:

If your dog meets these criteria, please register by visiting www.petbloodbankuk.org so that Pet Blood Bank UK can contact you about donating in the future. Call 01509 232222 if you have any queries. Even if your dog doesn't meet the above criteria, you can still get involved by recommending friends with large dogs, volunteering to help at a collection session, or fundraising for PBBuk.

Share via Email Share via Email Share on LinkedIn Share via whatsapp Share on Twitter Share on Facebook Share this article:
Back to top
Rum Robinson
This is a great initiative - I hope that word of the Pet Blood Bank continues to spread so that they receive more donations from eligible dogs. Is the same kind of thing not possible with smaller animals, such as cats? It would be great if a service like this could be available to all pets, but not if it endangers the donor animal.
Posted on: December 06 2011
Jan Oates
I have 2 Alaskan malamute aged 2 boy and a girl she been spayed but he's not both in good health great with people can the give blood
Posted on: July 25 2014