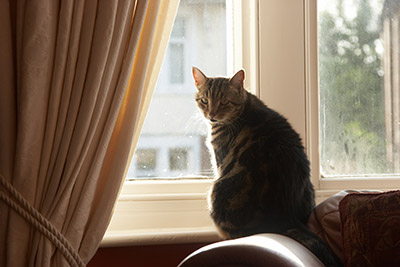 Is your cat an indoor cat or an outdoor cat? Did you make the choice or was it decided for you? There are several factors at play when deciding how your cat will spend its days as comfortably as possible, ranging from safety and health to mental health.

Petplan takes a look at the pros and cons of keeping your cat indoors or letting them go outdoors.

Cats have spent 13 million years evolving to become a top of the food chain predator. They are more than capable of looking after themselves out in the wilds of the urban or suburban sprawl.

Their keen senses and quick reflexes have been honed through millennia to ensure that they are strong and smart with their surroundings. Cats should be encouraged to explore these parts of their being, but you should always be aware of the potential dangers they may face out there in the world.

The predominant reason that most people have for keeping their cats indoors is for the safety of their pet. It’s currently estimated that one in four cats will be killed in traffic, a problem which shows no sign of slowing down in the modern age.

Before the 1950’s and the invention of cat litter, keeping your cat indoors was not something that was even possible but since then we’ve also seen a massive surge in the number of cars on the road, especially in urban areas.

Though, once cats have adapted to the potential risks of the road they are much less likely to meet their end this way and most of these deaths will occur in the first year of a cat’s life. Unfortunately, in rural areas this is still a risk due to there being very few cars and cats never really adapting to the dangers posed by the open road.

Offering your cat the chance to socialise and exhibit their natural behaviours is very important for them to develop a healthy and happy lifestyle.

Allowing your cat to interact with other cats allows them to have interactions and needed fulfilment that they simply can’t get from you. By allowing them these excursions you’re helping them to develop a more balanced psyche but of course, it’s good to be mindful of the dangers so you can prepare should anything go wrong.

Cats are at risk of other problems that come from interacting with other animals and the outside world. Diseases and parasites from other cats, such as heartworm or ring worm, that they wouldn’t catch at home can cause problems for both you and your pet, and often require trips to the vet, along with general anxiety.

Another problem that comes from interacting with other animals can be injuries sustained during a fight with cats or other competitive predators in the area like foxes. While socialising can be good for animals, there’s always the risk that they’ll encounter some who are not so sociable, putting your pet in danger.

Again, this isn’t to say that your cats should be kept inside at all times for fear of something happening but it helps to know the risks.

While statistically indoor cats do live longer than their outdoor cousins, there is the question of their mental health to consider.

Just like humans, animals are prone to all kinds of mental illnesses and cats are no different. If their environment isn’t stimulating, then your pet could easily start to show symptoms of poor mental health.

Outdoor cats spend a large portion of their time using their highly evolved sense to hunt for food. When that food is provided for them and they no longer feel the need to hunt, they may simply spend more time sleeping, ultimately degrading their wellbeing. Think about how people get when they’re stuck in the house for too long, then think about doing that for a lifetime.

Ideally, you should be allowing your cat to leave when it needs to but if you’re against this or it’s not physically possible, for example, if you live in a large city apartment block, then you need to ensure that your cat has lots to play with and burns that excess energy to keep its mind sharp.

Whether your cat lives indoors or outdoors is very much up to the individual owner but you should be aware of the risks in your specific area so that you can ensure the safety of your pet, which is always the most important thing.

Do you have any tips for managing your indoor or outdoor pets’ lives? Let us know in the comments below...