How to deal with more than one cat in your home? 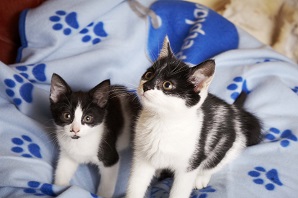 Deciding whether to get a cat is a big decision that requires plenty of careful consideration – and if you’re thinking of adding another into a home that already has one (or getting more than one), then there are even more things to deliberate.

All of the things you initially took into account – such as expense and your ability to care for them – are still vitally important, but this time around there is more than one pet to think about.

Despite their reputation as solitary animals, there are plenty of people who believe the companionship of another cat can be extremely beneficial to our feline friends.

However, there is not a general consensus as to whether multiple-cat households are a good thing.

As mentioned above, cats are generally solitary creatures and are not as adept at communicating with their own kind as many other animals – this means that when there is conflict, fighting is likely to occur.

If there is more than one cat in a relatively confined space – such as a city flat – then space is also an important consideration.

Cats need their own space and, if they are unable to get it within their home environment, then they may develop stress-related illnesses or behaviours such as urine spraying, over-grooming or idiopathic cystitis.

Also, if you live in an urban environment then there can be large amounts of cats within your neighbourhood.

Speaking to the Radio Times, animal behaviour expert, Dr Sarah Ellis, said: "Sadly there are a lot of disputes going on due to the high density of cats.

Multi-cat households can be a success under the right circumstances though.

Siblings that have been raised together often make the best pairings, while making sure that both cats have access to their own resources is also vital.

You will have to provide one of everything for each cat – don’t expect them to share food bowls or scratching posts because cats are generally territorial and can have difficulty sharing.

Top Tips for introducing a new cat to your household

If you have assessed your own cat’s temperament and decided that they would benefit from some feline companionship, then there are some simple steps to take when introducing them:

Do you have a home full of cats? What are your top tips for making a happy home? Let us know your story below…

Share via Email Share via Email Share on LinkedIn Share via whatsapp Share on Twitter Share on Facebook Share this article:
Back to top
Amanda Morton-King
I always buy 2 cats from a litter because they are already socialised together and they keep each other company when I am out. I currently have 6 cats though, as I have adopted 2 elderly cats who needed rehoming. Now they all sleep in various pairs together. My trick with a new cat is to take a damp flannel and wipe along the new cat's back, then wipe down surfaces like window sills etc with the same flannel so that the cat's smell is introduced into each room.
Posted on: August 23 2015
Petplan
Hi AmandaMany thanks for sharing your top tips with everyone. It's great to hear that your method is working. Please do visit our blog again and feel free to share any other tips or comments you have with us. We post a new blog topic each week.Many thanksJade - the Petplan Team
Posted on: August 24 2015